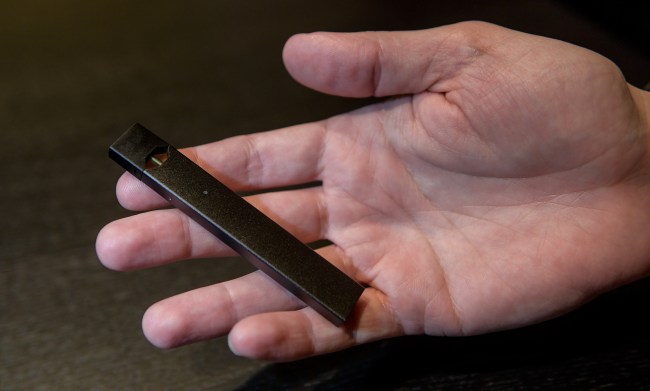 It’s been quite some time since a vaping horror story has gone viral, as companies have moved swiftly to fix defections that have caused devices to literally blow up in peoples’ faces.

This story is equally, if not more, alarming because the problem isn’t a defective device, but a fully functioning one.

Chance Ammirata, an 18-year-old from Florida, nearly lost his life he was rushed to the emergency room to treat a collapsed lung, which he believes was the result of a year-and-a-half of Juuling.

Chance claimed he had ripped through a Juul pod every two days, and his habit caught up to him when he began experiencing pain in his side last Monday. He recalled having trouble sleeping, but chalked it up to a mysterious pulled muscle. He woke up the next day with the discomfort worsening, coming to a head when he arrived at school.

“I remember [my friend] made me laugh,” Ammirata told the Daily Mail, “and it felt like my chest was collapsing, like I was having a heart attack.”

That’s when Chance decided to go to the hospital, and within minutes, he was surrounded by a team of surgeons who worked to insert a tube into his lung to keep it inflated.

My chest tube was just removed. I can’t stop shaking but this experience has been insane it’s gonna be a long two week healing process. pic.twitter.com/RGNKglmBZw

“When they did the actual major surgery to reinflate my lungs, the surgeon said, ‘Whatever you’ve been smoking has been leaving these black dots on your lungs,’ ” Chance said.

The surgeons, who successfully repaired the 18-year-old’s lung, told him that the black dots would take years to heal, if ever. He could also no longer do things he loved, like cross-country running, scuba diving, and traveling by plane.

PLEASE RETWEET THIS IS EFFECTING THE WORLD AND WE ARE THE ONES WHO CAN EFFECT CHANGE. DO NOT STOP SHARING SAVE LIVES. I WILL BE THE EXAMPLE IF IT MEANS NO ONE ELSE NEEDS TO BE ! pic.twitter.com/AeYBPT9fUS

Chance is now on the move to advocate people cease Juuling immediately, urging people to send him videos of themselves destroying their Juuls. It’s worked.

A Juul spokesperson responded to the viral story via the New York Post.

“At JUUL Labs, we have no higher priority than consumer safety. While we do not have any details about this alleged incident beyond what we have read in recent media reports, we have robust safety monitoring systems in place and will vigilantly monitor for any evidence of safety issues as we continue to combat youth usage and eliminate cigarettes, the number one cause of preventable death in the world.”

Is there anything that allows me to get a goddamn buzz on without endangering myself? Get your shit together, scientists.