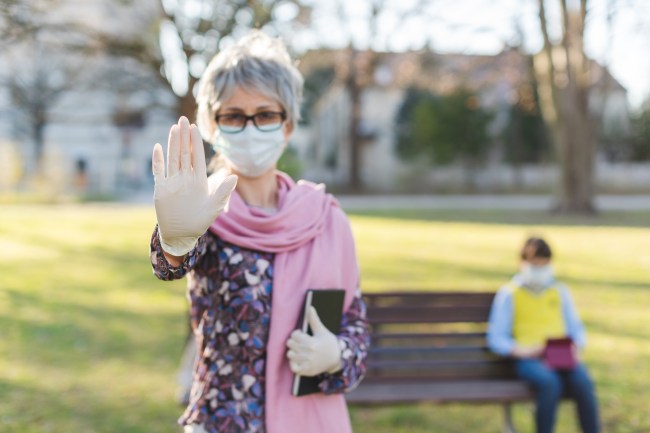 Back before we ever got fakes we’d send one of our friends into the liquor store to buy booze and it would work about 51% of the time. The dude was 18 but looked like he was 15, the trick was he looked 100% Irish and despite being from Florida he could pull of a flawless Irish accent. He’d walk in and start talking in his Irish accent and more often than not the store clerk would just sell him the booze because he figured it was legal in Europe so why not sell it to him? Then when we got fakes it was all over…

There’s now a trend taking off on TikTok where teens are taking advantage of coronavirus masks to purchase booze because the teller can’t see anyone’s full face. Some are going so far as to wear costumes and dress up like grandmas.

If teens taking advantage of this time to load up on booze bothers you in any way, shape, or form you need to remind yourself you don’t hate the player, hate the game.

Here’s one that’s gone so far as to dress up like a grandma. This level of commitment to buying underage alcohol reminds me of myself back in the day. According to the Post, this went down in California and the girl in the video said she tried to talk as little as possible and make her voice a little croaky.

She’s sending out a PSA to everyone about how fakes are flawless right now even when they’re crappy because you have the right to keep your face protected. At the very least they could ask to see your face and you could refuse on the grounds that you don’t want to breathe in the virus. They hand you the ID and you leave.

Here’s another one that’s racked up over 2 million views of a girl dressing up as a grandma to pull off the underage fake ID scam that’s gone viral on TikTok:

This is working. These underage drinkers who would normally be in Europe right now studying abroad for the Summer and drinking legally but instead are stuck in America with ridiculous 21+ drinking laws are adapting to the global health crisis in a way I can’t help but respect. I’m not advocating that anyone goes out there and breaks the law but you have to respect the hustle.