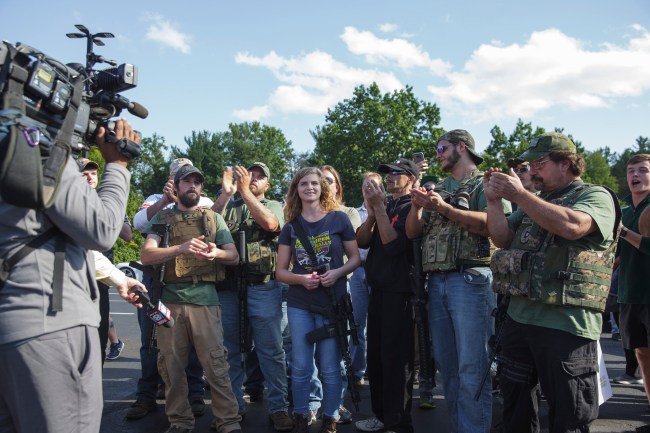 My executive protection team is the most badass one around! Good luck, libs.https://t.co/LaBE73rHdF pic.twitter.com/qdOk8ePGRN

Tekashi 6ix9ine was spotted out shopping at a mall with his security in NY today👀‼️ pic.twitter.com/f9ruZerVqx

Let’s make this fun. We’re not talking about whose team is better or safer or cooler. We’re talking about if these two squads ran into each other on the street and for some reason, things escalated, who comes out on top? Whose charge (bodyguard speak for the person they’re protecting) walks away unscathed?

TMZ– 6ix9ine tells us he plans to keep roaming the streets of the Big Apple — but adds he’ll be rolling “like Trump” in that he’ll have a ton of armed guards around. Specifically, he says he plans to hire 22 of them, all former law enforcement officers.

A post shared by RAT PACK WORLDWIDE SECURITY (@ratpackworldwidesecurity) on Jul 10, 2020 at 7:20am PDT

4 against 22? Pretty significant numerical advantage. Except the photos of Tekashi’s team certainly don’t appear to show 22 bodyguards. Maybe he’s exaggerating. I thought he was a straight shooter. Even so, they’re former cops. And everyone knows that former cops are no longer constrained by the rules of duty. Now, they’re private citizens looking forward to the freedoms of life after the badge. And that’s a big deal.

Kaitlin, meanwhile, has sourced her detail from the rock-solid outfit “Rat Pack Worldwide Security.” We don’t know much about them aside from their terrific instagram page. Looks like they enjoy boxing, shooting, and hiring underage employees:

Where does Gun Girl take these guys? College campuses. The streets of Washington D.C. Frat parties with stain-resistant linoleum floors—the sort you might find at puppy daycare—in case someone poops his/her pants. These places aren’t exactly gun-friendly. This might explain why that highlight reel she put together shows them carrying shoulder fannypack instead of guns? Not very intimidating, guys.

You take away the guns from gun girl’s team, I give the nod to Tekashi’s squad. Even if 22 actually means 10, I’ll take ten former cops against Kaitlin’s ratpack anyday. They’re far too focused on selling merch to be taken seriously.

A post shared by RAT PACK WORLDWIDE SECURITY (@ratpackworldwidesecurity) on Jul 22, 2020 at 4:51am PDT