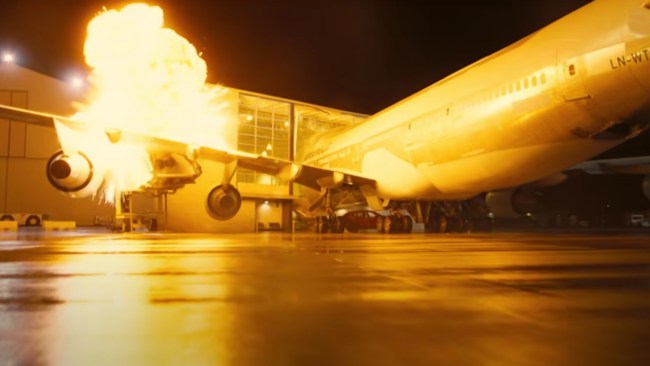 God, I love this dude. Just loves mindfucking people and blowing shit up, as any true bro does.  Can’t get enough of it. Christopher Nolan looks at time and space and wonders “what if the past… but the future?” and then tosses in a few explosions for good measure. And guess what? It works every single time! Every damn time. Find me a bad Nolan movie. Sure, they can sometimes be totally inexplicable (looking at you, The Dark Knight Rises… and also you Interstellar… and I suppose you as well Inception), but it doesn’t matter because they’re pop cultural events: the man simply knows how to entertain the masses. And because of that, he’s arguably one of the top five most important living directors.

With that in mind, it can be chalked up to destiny that his next film is set to be the big blockbuster that re-opens movie theaters: the John David Washington and Robert Pattinson-starring action thrill Tenet, which is set to hit theaters on July 17.

As you can see in the above trailer, Tenet looks set to include all of the classic Nolans tricks and flair, and then some, including his adoration of practical effects, which manifests itself in the form of a real Boeing 747 that Nolan decided to blow up because it was “more efficient” than visual effects.

“I planned to do it using miniatures and set-piece builds and a combination of visual effects and all the rest,” Nolan told Total Film magazine. “However, while scouting for locations in Victorville, California, the team discovered a massive array of old planes. We started to run the numbers…It became apparent that it would actually be more efficient to buy a real plane of the real size, and perform this sequence for real in camera, rather than build miniatures or go the CG route.”

According to Pattinson, the film’s star, the 747 explosion scene is “bold to the point of ridiculousness”:

“You wouldn’t have thought there was any reality where you would be doing a scene where they just have an actual 747 to blow up!” Pattinson told GQ Magazine. “It’s so bold to the point of ridiculousness… I remember, as we were shooting it, I was thinking, ‘How many more times is this even going to be happening in a film at all?’”

Christopher Nolan, man, just a legend. “Oh, audiences are tired of CGI-heavy action movies? Somebody go get me a fucking plane.“

RELATED: The Cast Of ‘Tenet’ Had So Many Questions That Christopher Nolan Had To Remain ‘Very Calm And Patient’