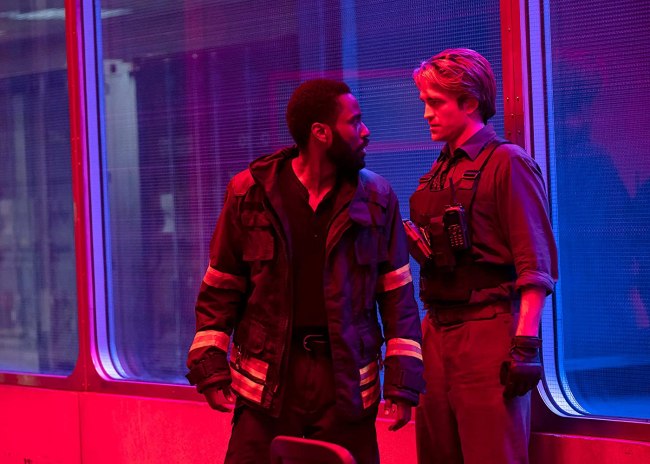 Nolan has always been, for better or for worse, synonymous with mindfuckery ever since he burst onto the scene with Memento back in the late 90s. But while previous boundary-pushing, idea-expanding, time-warping Nolan entries like Memento and Inception at least took the time to make sure the audience is aware of the mechanics of the plot — albeit in a painstakingly literal fashion in the form of Joseph Gordon Levitt’s exposition-centric character — TENETS takes the “show us, don’t tell us” philosophy of screenwriting far too literally, choosing to simply show audiences “tenet” works without fully elaborating on why it works or what it means. Even for a director like Nolan, who’s made his name through the art of beautiful cinematic confusion, TENET is utterly incoherent, so focused on its gimmick that it never once takes the TIME to help the audience figure out what the hell’s going on.

#TENET is utterly incoherent. So focused on its gimmick that it never once takes the TIME to help the audience figure out what the hell is going on.

Nolan has finally jumped the shark. Arguably his worst movie.

Not once did I fully understand how “tenet” — the physics mechanic that makes objects move through time in reverse — worked or why it was so integral to the safety of the world. Not once did I understand any of the character’s roles in this universe or what they were aiming to achieve other than “saving the day”, which is the basic goal of any hero in any movie. Instead, due to its fixation with its own inverse shtick, Tenet simply draws a line in the sand between the good guys and the bad and lets you know that John David Washington’s “Protagonist” (that’s literally the character’s name) is the one you should be rooting for. Outside of that vague, general rooting direction, the film never takes the time to explain to the audience why these chess pieces are moving in these directions, as Nolan appears too preoccupied with the directions themselves. Forwards, backward, direct, inverse, upside down, right-side up– all fascinating ideas wrapped into locales and stunts that ultimately fall hollow due to their general lack of clarity. Sure, an explosion can look cool, but if you don’t understand why something is exploding or what that explosion means for the story, does it even matter?

TENET certainly isn’t all disaster, though, as the aforementioned set-pieces — despite not fully comprehending how they relate to the plot — are a spectacle all the same. But when compared to Nolan’s previous forays into the art of grandiose filmmaking, TENET ranks near the bottom, as it’s less of a movie and more of a concept paraded and proliferated through eye-popping visuals that are ultimately rendered ineffective by their own narrative incoherence. TENET is all parts and no sum, all direction and no explanation, all time and no measure.