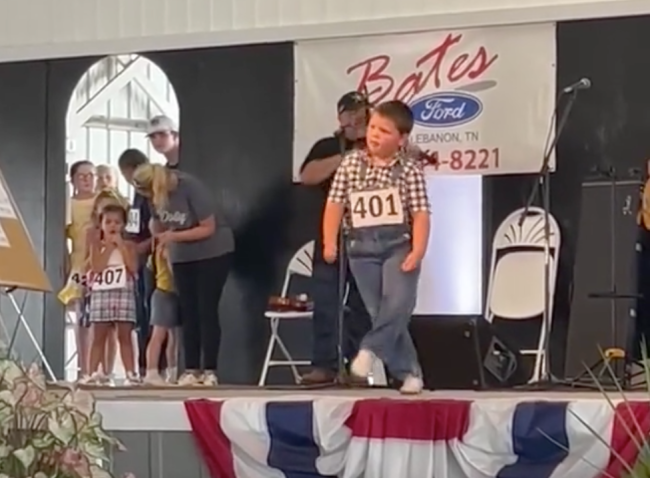 The Tennessee State Fair was held in Wilson County, Tenn. over the past few weeks and this big fella showed up in overalls and absolutely stole the show. The young man by the name of Curtis Rowe cut a rug during the individual clogging competition and was named the champion for his division.

Just watching him get down will be the highlight of your day, guaranteed.

Clogging is a type of dance that combines percussive footwork with Appalachian figure dancing in the 1920s. It has constantly evolved ever since, but its roots remain. Dancers use a specific shoe to strike the heel and toe against the floor— usually to the downbeat, with the heel keeping the rhythm.

It’s exhilarating and anyone of all ages can do it. This man turned 90 years old in May and also won a title at the Tennessee State Fair.

Tennessee’s State Fair competition was sanctioned by the National Clogging Organization and there were all kinds of categories for both solo performers, duos and teams. Here is a great example of what a team performances look like. This group tore it up at the State Fair last week and was also led by a surprisingly nimble big man.

What is a clogging competition?

There are quite a few different categories at an official, sanctioned clogging competition.

I don’t know the difference between them all, but if someone reading this is knowledgable in clogging and wanted to reach out, I would be grateful. I would venture to guess that the overall-clad champion was in the hoedown or freestyle category.

Here is a video of all the category winners dancing together. LOOK AT LITTLE CURTIS ROWE GET IT!

No matter what group he was in, Curtis was absolutely dominant.