Terry Crews Eats The World’s Hottest Wings, Learns That Pain Exists Outside Of The Gym 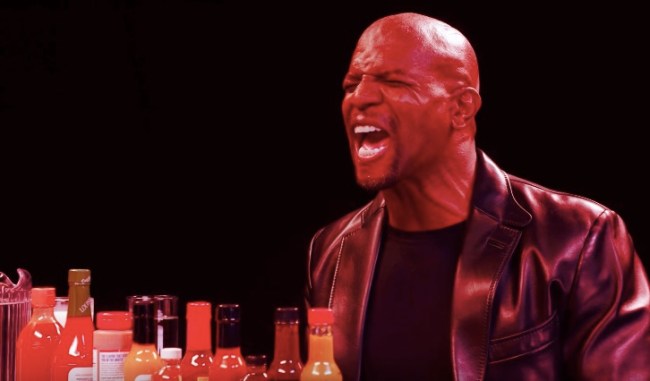 Actor Terry Crews is one of the most jacked men in Hollywood. His ridiculous muscles have landed him in some of the sickest Action films of the past decade, as well as the memorable Super Bowl ads for Old Spice. Terry’s also one of the hardest-working and funniest men you’ll find anywhere in show business.

In order to build muscles as stacked as Terry Crews an inordinate amount of time, energy, and pain must poured into the gym. Terry knows this. He’s been working his ass off for decades to get to where he’s at in life. But, that hard work in the gym didn’t prepare him for the pain he endured in the latest episode of Hot Ones with host Sean Evans:

Terry Crews sat down for his Hot Ones interview, and just like every other episode of Hot Ones the host and guest ate their way through the world’s hottest wings one by one. Each wing getting progressively and exponentially hotter. These torturous hot wings are made with the spiciest hot sauces on the planet, and it appears as if Mr. Crews wasn’t fully aware of what he’d signed up for. Nevertheless, Terry was a great sport and endured through the pain.

I’m starting to wonder if any celebrities actually watch episodes of Hot Ones before they agree to go on the show. I imagine if these Hollywood actors actually watched a few of the episodes before agreeing to appear for an interview they’d all realize the pain they were in for and 99% of them would bail…But, Terry Crews doesn’t seem like he’d shy away from the pain even if he knew the unimaginable fire that he’d have to endure from the world’s hottest wings.

You can check out previous episodes of HOT ONES by following that link.