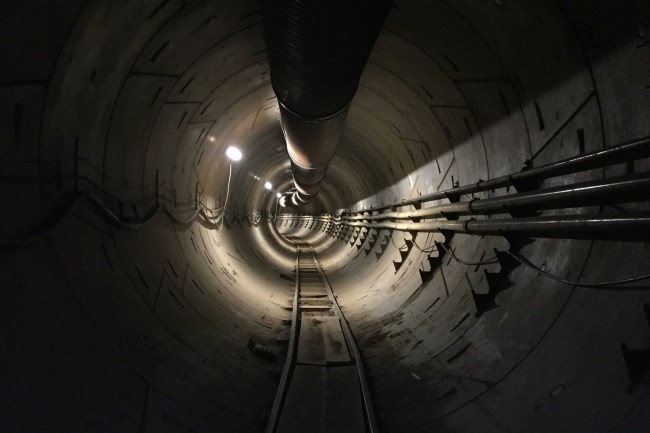 Via The Boring Company

Once again, Elon Musk is doing some cross-promotion with his various companies. In February, Musk strapped a Tesla Roadster into a Falcon Heavy rocket and blasted the vehicle into space. Now, Musk sent a Tesla Model X into one of the tunnels constructed by the Boring Company.

In a 2-mile “test tunnel” beneath Los Angeles, this Tesla Model X zooms effortlessly. The Tesla is fitted on special tracks that ferry the electric car underground to avoid traffic. This shows the potential of the underground tunnels could have on private vehicles and shoot them under cities at high speeds. For inter-city trips, the tunnels could transport people at speeds up to 150 mph. An elevator will take cars underground, then they will attach to “electric skates” and speed down the 13.5-foot diameter tunnel.

Musk has said that the tunnel systems will prioritize transporting numerous pedestrians and cyclists instead of personal vehicles. The original plans call for “high passenger-density urban transport” vehicles. The Boring Company tunnels will also be able to support a Hyperloop system.

This comes only days after the announcement that Chicago awarded the Boring Co. to construct a high-speed transit system between the O’Hare International Airport and downtown. The plan is to offer 16-passenger pods that can travel the 18 miles from O’Hare International Airport to the Loop in 12 minutes. Rides will cost $20-$25, which is about the same price as the Chicago taxi flat rate, but takes between 26 to 50 minutes to drive. The Boring Company has agreed to pay the upfront costs for the project, which is estimated will to be between $500 million and $1 billion.