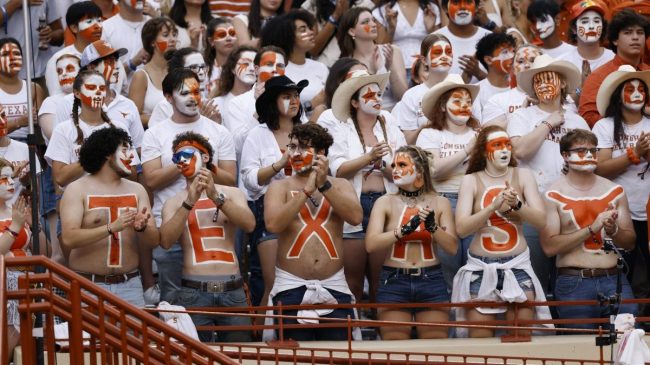 Texas Longhorns are fired up for their Saturday showdown with Nick Saban and the juggernaut that is the Alabama Crimson Tide.

Led by second-year coach Steve Sarkisian, Heisman candidate running back Bijan Robinson and stud freshman quarterback Quinn Ewers, the Longhorns have a lot of excitement around them in 2022.

Texas even picked up a first-place vote in the preseason AP Poll, though college football fans didn’t quite understand that one.

ESPN’s College Gameday in Austin for the contest and fans began lining up early in the week to get into Darryl K. Royal-Texas Memorial Stadium. Many showed up with signs in hand.

But now it appears that not everyone will be able to actually watch the game.

Texas Turning Away Students At Stadium Gates After Reaching Capacity

Texas students hoping to attend the school’s athletic events must buy what the university calls “The Big Ticket.”

The one-time, $200 purchase gives students access to tickets to all of the university’s home games across every sport. Students may store the pass on a mobile device. The school then scans student tickets on a first-come, first-serve basis.

But demand for tickets to Texas-Alabama far exceeded the typical ticket demand. So Texas implement a new set of rules specifically for the big game.

Beginning at 5:30 a.m., Big Ticket holders can line up at the designated student entry tent outside of Gate 25. Per university policy, overnight camping is not permitted.

– If you haven’t already, please download and save your mobile ticket to your digital wallet.

– Before you scan your ticket, please open your digital wallet and have your mobile ticket ready to present.

Unfortunately, that didn’t solve all the problems. Texas had to turn students away at the gates for the first time, and the rest of the college football world found it hilarious.

Our Texas Longhorns students are amazing! For the first time ever, DKR-Texas Memorial Stadium has reached capacity in the student sections and the overflow standing room only sections. Unfortunately, we cannot let any more students in at this time.

This isn't saying what you think it's saying https://t.co/rajwWx2jcK

Lmao congrats. Such an accomplishment https://t.co/87CA7VlxNi

First time ever? Not sure I’d have admitted that.

In the words of Bear Bryant, “Don’t y’all take football seriously down there?” https://t.co/fkSAPQ0aLD

Maybe Texas isn’t the football state everyone thinks it is?

For the first time in 98 years, #Texas has officially sold out its student section lol https://t.co/T9dNWGGtqV pic.twitter.com/CNSyl4uXy5

That’s not something we would’ve suggested admitting.