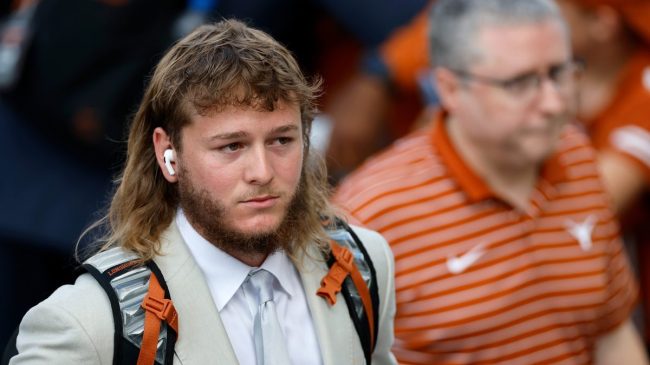 Texas Longhorns quarterback Quinn Ewers will have his work cut out for him on Saturday. The former can’t-miss, five-star prospect takes on Nick Saban and the top-ranked Alabama Crimson Tide in just his second-ever college star.

Ewers took a circuitous route to the starting job with the Longhorns. He first committed to his home-state school in August of 2020 before decommiting and pledging to the Ohio State Buckeyes.

But Ewers didn’t last long in Columbus. After backing up CJ Stroud in 2021, he hit the transfer portal in the offseason. The prodigal son then returned home, enrolling with the Longhorns in early 2022.

The starting spot was still far from a certainty, however. Second-year Texas coach Steve Sarkisian pitted Ewers against sophomore Hudson Card in a battle for the QB1 spot over the summer. Card played in seven games a year ago, throwing for 590 yards, five touchdowns and one interception.

Quinn Ewers Has A Laugh Over Hilarious Sign At College Gameday

Ewers’ first start with the Longhorns was a success. The mulleted signal caller threw for 225 yards, two touchdowns and one pick in a 52-10 blowout victory over Louisiana-Monroe.

But not everything went according to plan. When Ewers left the game, he found that his car had been towed while he was playing.

How’d I get towed during the game🤣

With the Longhorns playing host to Alabama in the biggest game on the week two calendar, ESPN’s College Gameday traveled to Austin.

That led one Texas fan to come up with a hilarious sign idea taking a jab at Ewers’ misfortune.

“Today Quinn earns his parking spot by the tower for life,” the sign read.

Let’s hope for Ewers’ sake that he can still laugh about it after the game.