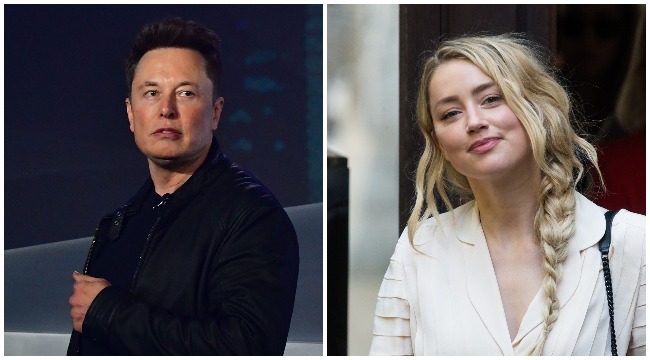 Elon Musk is nearly three months into his quest to sell almost “all physical possessions,” as the irony of accumulating stuff on a planet he doesn’t even want to be on has finally dawned on the 49-year-old billionaire.

So what causes one man to betray fame and limitless fortune in a mission to colonize a barren planet? A broken heart, of course.

Musk claimed that his feelings were “hurt” when Amber Heard ghosted him during her marriage to Johnny Depp, after the Tesla founder allegedly visited Heard late at night at Depp’s Los Angeles penthouse a few times a week.

Text messages from May 2016 were read in court Tuesday in conjunction with Johnny Depp’s libel trial, after Heard revealed to Elon (known as “Rocketman” in Heard’s phone) that she was seeking a restraining order against her then-husband.

Text msgs of Amber Heard and Elon Musk "Rocketman", while being married to #JohnnyDepp. #justiceforjohnnydepp pic.twitter.com/4u42d1GZps

Heard: For such a smart man….I would think you wouldn’t need to investigate any further than your last text to me before such radio silence commenced…

Rocketman: Well, I’m just glad you’re ok. You talked about J being violent in the past and still having keys to the apartment, so I thought something might have happened.

Heard: I did. But that must irrelevant.

I have the locks changed.

Rocketman: Wtf? But you’re ok, right? Is there anything I can do?

I’m happy to engage 24/7 security for you, if you’d like. It would be utterly confidential.

Heard: All that is irrelevant why I stopped talking to you.

Rocketman: I know. And the offer would stand if you never wanted to see me again.

Anyway, sorry for being an idiot. The radio silence hurt a lot. It only matter because I really like you.

My imagination needed to work overtime to picture Elon Musk demonstrating the vulnerability of a high school junior who was just told by his crush that she’s waiting for a hotter guy to ask her to prom.

After the text messages were read aloud in court, one of Depp’s lawyers called out Heard for the alleged hypocrisy of engaging with other men while taking issue with Depp’s jealousy.

“Were you telling Mr. Depp about this?”

“Time and again, you have accused [Depp] of being jealous, but we can see here you are in communication with someone,” Laws said.

But Heard responded, saying, “I think all jealousy could be deemed illogical.”

Since the love triangle between Depp, Heard, and Musk, Elon has had a child, unloaded SEVEN of his mansions, and listened to Bon Iver on repeat over a carton of Ben & Jerry’s wondering where it all went wrong. Love doesn’t care about your money.