Flying For Thanksgiving? These Are The Foods You Can And Can’t Get Through Security With 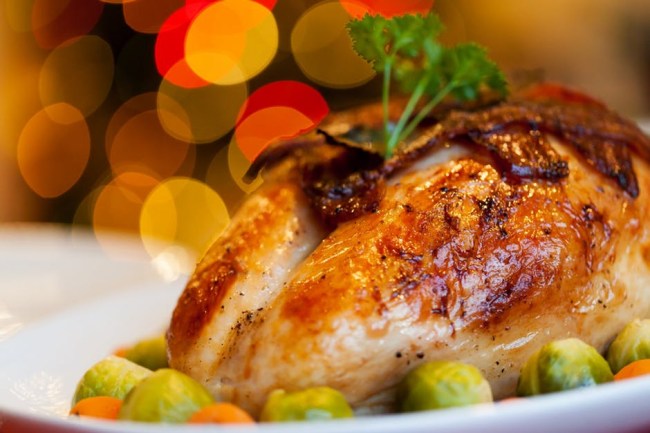 Thanksgiving travel can be stressful AF, with, seemingly, everyone making their way to the airport to get their asses home to see family and friends in order to stuff their faces and watch football together. While the travel itself can be frustrating, imagine getting to the airport after staying up all night to slave over making some food you want to bring with you and, boom, airport security tells you you’ve got to toss it out.

We all know certain items like water, knives and all that other crap won’t pass through security, but, during Thanksgiving travel, is there a little more lenience when it comes to what can be taken on a plane? Not really, because the The Points Guy, via LifeHacker, broke down what passengers can and can’t get through security when doing Thanksgiving travel. Here’s a quick look at what to pack and what to try to prep once you get to your destination.

According to The Points Guy, bringing a turkey onto the airplane is actually OK to do, regardless of it being raw or cooked. That said, be prepared for the bird to get a little extra attention and require further screening.

Taking on the challenge of making grandpa’s famous buttery rum pie this year? Good for you, bro, we know baking isn’t an easy task. While it may look like crap with all the shifting a plane causes, you’re totally cool to bring this thing onto a flight — but leave the whipped cream bottle at home, because that’s going to have to be tossed out.

Sorry, fellas, even though you want to surprise your parents with some kick-ass local wine or bourbon this Thanksgiving, you’re going to have to package it up and check it, ’cause it’s not coming through security. The same goes for anything items packaged in water, like olives or tuna.

You may have spent a bunch of time mashing up all those potatoes, but TSA doesn’t care, because they’re going to have to be trashed before going through security. If you want to bring raw veggies on the plane, that’s fine, but who’s psycho enough to want to do that, just buy them when you land.

One way around lots of these security restrictions? Freeze your food. Yep, The Points Guy says that all frozen foods are safe for Thanksgiving travel, which includes soups, mashed potatoes and other stuff.

OK, so now that you know all that, don’t be the jackass who holds up the security line by packing two turkeys and a pound of mashed potatoes with you to the airport, making everyone else pissed at you. Happy travels, bros.