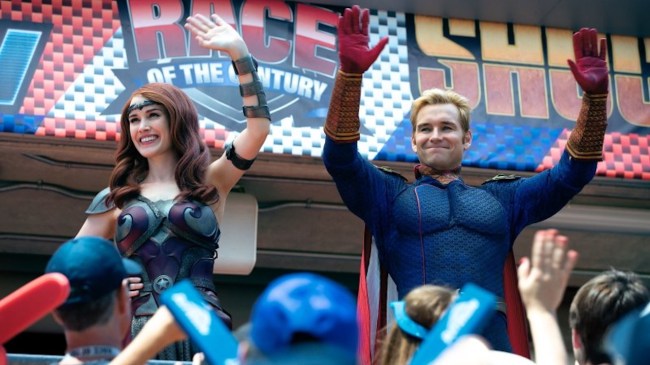 Given my affinity for anything and everything comic book related, it should come as no surprise that Amazon Studio’s twisted superhero series The Boys has been one of my favorite shows of 2019.

A perverted version of the classic hero tale, The Boys imagines a world where the superheroes are far from being the good guys. And let me tell you something, that world is fucking wild, because The Boys truly turned out to be one of the most insane series I’ve ever had the pleasure of watching.

And according to executive producers Seth Rogen and Evan Goldberg, there’s only going to be more madness in the second season.

Speaking to Collider for a sit-down interview, long-time collaborators and best friends Seth Rogen and Evan Goldberg discussed the hit Amazon series, which is currently filming its highly anticipated second season (especially considering the bomb that was dropped in the season one finale).

And according to the duo behind classic comedies such as Superbad and Pineapple Express, the second season is going to be even bigger, better, and therefore, probably even bloodier:

“They already have more resources for the second season. They’re adding more characters, the scope of the show organically grows as the show continues. We just watched, actually, the first episode of the second season this week. It was a wonderful thing as producers. This is way better than I ever could’ve hoped it would be,” Rogen told Collider.

Given the rampant success of the highly entertaining first season, it’s logical that Amazon seems intent on growing The Boys into one of their premier programs.

‘The Boys’ is currently streaming exclusively on Amazon Prime.