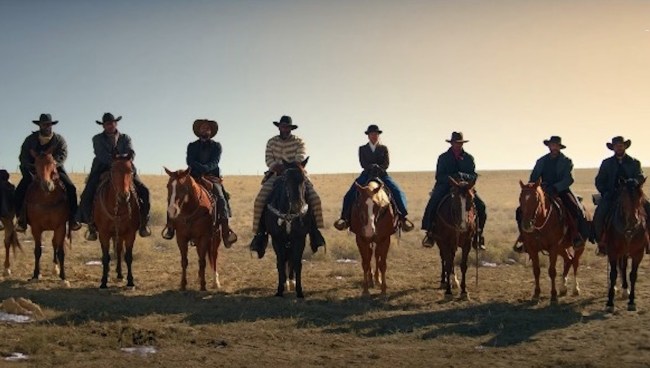 The Western genre is an admitted blindspot of mine. Only within the last few weeks have I seen modern classics in the genre such as Unforgiven and Tombstone for the first time, let alone the dozens of OGs that came to define a huge chunk of early American cinema. No joke, up until a couple of weeks ago, the best Western I’d ever seen was Logan.

Holy shit Tombstone’s cast is a who’s who of “that guy!” actors.

I’m trying, though, to buff up on my knowledge of Westerns and it certainly seems like I picked a hell of a time to do so, as Netflix just dropped the first trailer for The Harder They Fall, the star-studded Western that features perhaps the year’s best cast (it’s certainly either this or GDT’s Nightmare Alley), boasting the likes of Jonathan Majors, Idris Elba, Regina King, LaKeith Stanfield, Zazie Beetz, and Delroy Lindo at the top of the call sheet.

Not only does The Harder They Fall tote a tantalizing cast, but based on the official trailer for the film, it’s also set to be a highly stylized, brutally gory, gorgeously shot, and wickedly fun take on the Western genre. Just add this one to the ever-growing list of bangers coming out this fall. Movie fans, we are EATIN’.

Here’s the official synopsis for The Harder They Fall, via Netflix:

When outlaw Nat Love (Jonathan Majors) discovers that his enemy Rufus Buck (Idris Elba) is being released from prison he rounds up his gang to track Rufus down and seek revenge. Those riding with him in this assured, righteously new school Western include his former love Stagecoach Mary (Zazie Beetz), his right and left hand men — hot-tempered Bill Pickett (Edi Gathegi) and fast drawing Jim Beckwourth (R.J. Cyler)—and a surprising adversary-turned-ally. Rufus Buck has his own fearsome crew, including “Treacherous” Trudy Smith (Regina King) and Cherokee Bill (LaKeith Stanfield), and they are not a group that knows how to lose.