‘The Office’ LEGO Set Is Here With 15 Minifigures And So Many Amazing Details! 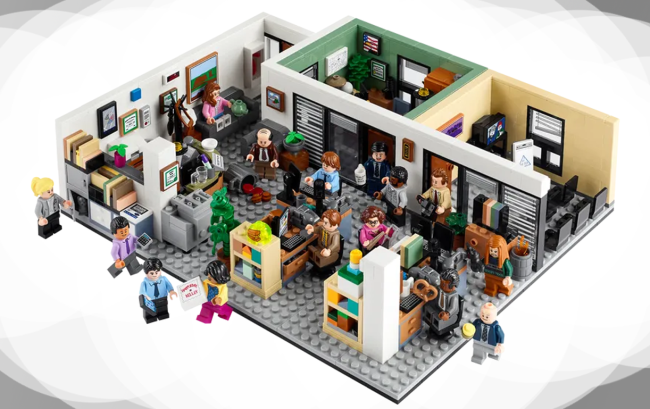 There have been a lot of amazing LEGO sets released over the years: Jerry Seinfeld’s apartment, the Friends apartments, Hogwarts Castle, the Home Alone house, but The Office?!

Yep, The Office now has its very own LEGO Ideas set, available for pre-order, and it has just about everything a fan of the legendary sitcom could want.

Awhile back, LEGO came out with a rather basic kids version of The Office with Michael Scott, Dwight Schrute, and Jim Halpert, but this new set… this is amazing.

12 of the minifigures even have expressions on both sides of their heads so you just turn them around to change their look.

LEGO has officially revealed their ‘THE OFFICE’ set.

It will cost $120 and release on October 1. pic.twitter.com/tYjXwsDmsa

The 1,164-piece set includes Pam’s reception area, Michael’s office (which slides out for display on its own), Jim and Dwight’s desk island, Phyllis and Stanley desk island, the conference room (with whiteboard), and an illustrated booklet about The Office.

This set should be awarded a Dundee for Best Build Ever.
Introducing LEGO® Ideas 21336 #TheOffice. Available for pre-order now – https://t.co/PmqlMviMrv. pic.twitter.com/covum4DBM2

How can any diehard fan of The Office possibly resist? (I know I couldn’t). Heck, it’s a better investment than gold!

Pre-orders for the set, which ships on October 1, begin today on LEGO.com and Walmart.com.