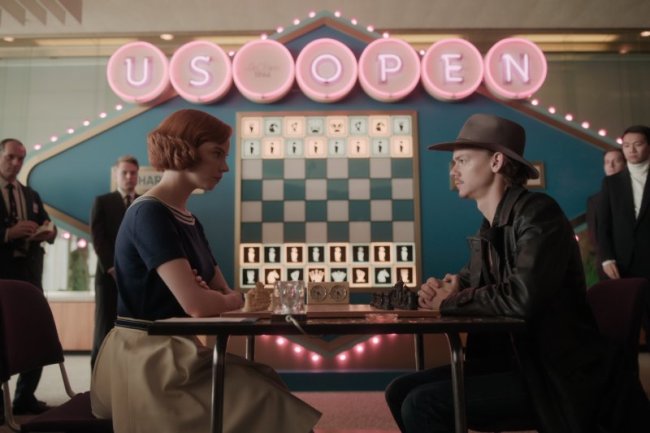 You may not think that a mini-series about the game of chess would be all that exciting. But when it’s a drama based in the 1960’s that includes addiction, death, love, Russians, and an orphan beating the hell out of everyone on the board, it’s actually great.

Yes, the centerpiece of Netflix’s The Queen’s Gambit is the game of chess, but it’s so much more than that honestly making it one of the best shows of 2020.

The seven-episode show debuted on Netflix in late October and has gotten everyone not only talking about chess, but wanting to play the game which has caused chess board sales to skyrocket.

Mary Higbe, director of marketing at Goliath Games told NPR that chess sales are up over 1,000%.

“Our October sales for chess were up 178% over the same period last year,” Higbe says. That’s a big increase. But something else unexpected happened at the end of the month. Now, she says, “our chess sales are up 1,048%.“

eBay even reported a 273% increase in searches for chess sets within 10 days of the show’s release, while the word ‘chess’ nearly doubled in Google searches from the previous year.

Sure, it’s safe to assume that chess and boardgame sales went up at the start of the pandemic with everyone stuck inside, but The Queen’s Gambit seems to have created a perfect storm and now it’s becoming difficult just to find a chessboard.

After getting two episodes into the show myself, I turned to my wife and told her that we needed to start playing chess. Am I a big chess guy? No. Do I like board games? Not really. But the show made my brain say ‘huh, we should play this game I otherwise would have zero interest in that we’ll absolutely be bored within about 11 minutes.’

There goes big tech again, just controlling our lives trying to get us all to play chess.