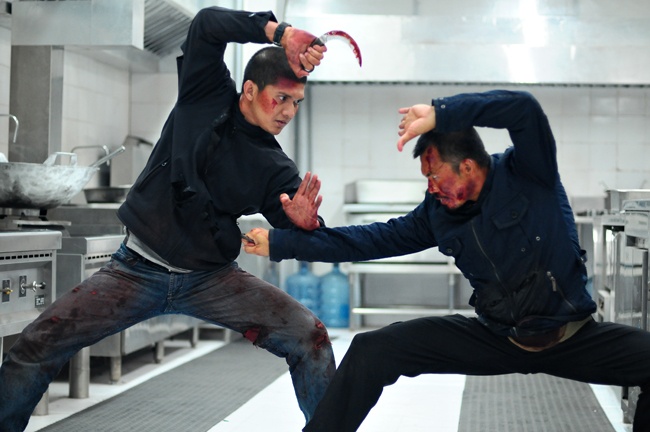 Last week, I wrote an entire article about The Raid. Despite the fact that it’s widely considered to be one of the greatest action movies of the last 20 years, because it’s an Indonesian film, it’s an incredibly and criminally underseen movie.

What makes The Raid so special is three-pronged: A) the style of martial arts they deploy (Pencak Silat), B) the sublime choreography of said martial art, and C) the simplicity of the plot. For lack of a better term, it’s one of the “purest” action movies I’ve ever seen: no frills, all business.

The sequel to The Raid, The Raid: Berandal, takes everything that the sequel did well and ramps it up another notch, as both the plot and the fight sequences are more complex. Given that the first two films in the franchise were so successful, one would think that a third film would be on the way.

According to director Gareth Edwards, while that third film may never happen, this is what it would look like if it did. First off, Edwards said he’d want to move on from the main character, Rama:

I couldn’t fathom of another fucking reason why he would put his life at risk and separate himself from his fucking wife and kid again. I was like, it can’t be about Rama. It just can’t, because if he does something to pull himself away from his poor fucking wife and kid again, I’d be like, “Hmm, you sort of deserve to die now really. Take some responsibility and be a father for a change!” [via Collider]

After making his case for moving on from Rama, Edwards then dove into the thick of the plot:

The story was going to go back in time to the moment in The Raid 2 when the Goto Gang, the Japanese gang, are having a meeting, and Goto tells his right-hand man to take care of it, wipe out every corrupt cop and politician that they have on the books and start fresh. The Raid 3 would begin with Rama coming out of that building after having killed everybody and saying ‘No, I’m done’. He walks away to [police officer] Bunawar, who’ll be waiting for him in his car, he gets in and drives away. And you stay with the Japanese gang, who are like, ‘What the fuck do we do now? Everyone’s dead, we’ve got no-one to kill.’ They get into their car, and as they’re driving along all of a sudden this other car rocks up alongside them and just blitzes them, and the cars crash. Goto, his son, and his right-hand man are the only remaining survivors from that attack, and it cuts to credits and says ‘The Raid 3’.

Then it would jump back in time. The idea was that the right-hand man, after being told to kill off all the politicians and cops and wipe the clean slate, would call back to Tokyo to the big huge boss, and be like, ‘Goto’s going fucking nuts. This is fucking crazy, what do I do?’ The call from HQ is, ‘Keep him still, keep him close, we’ll send people to take care of it, and if you do that for us, you can take over his turf.’ The attack goes wrong – it’s a kill squad from Japan who have turned up and taken out the Gotos. Goto has no idea that this right-hand man has betrayed him and set him up for the ambush.

They go off into hiding, all the way to the jungles of West Java. Goto arranges to meet up with this old mafia boss (played by) Christine Hakim, who has trained killers in her jungle retreat. She’s providing protection for Goto because they go way back, she’s the one who introduced him to Jakarta in the first place. The idea is this Japanese kill squad that’s used to the streets of Tokyo suddenly have to deal with the terrain of a jungle-hunt, a bit like Predator in a way. Christine’s militia, these guerrilla kids, would be taking care of this Japanese intrusion on their land. I didn’t work out the whole thing, but at some point Goto’s son would have got killed, he would have realised that it was the right-hand man who betrayed him all along, and they’d have some real gnarly tribal way of dealing with him. And Goto and this guerrilla gang of Indonesian killers would then go back to Tokyo in order to fucking take care of the people that ordered to kill him. [Collider]

Yup, predictably insane. While it certainly sounds like we won’t be getting The Raid 3 anytime soon, we can always hope.

RELATED: Under-The-Radar Movies To Finally Check Out: ‘The Raid’