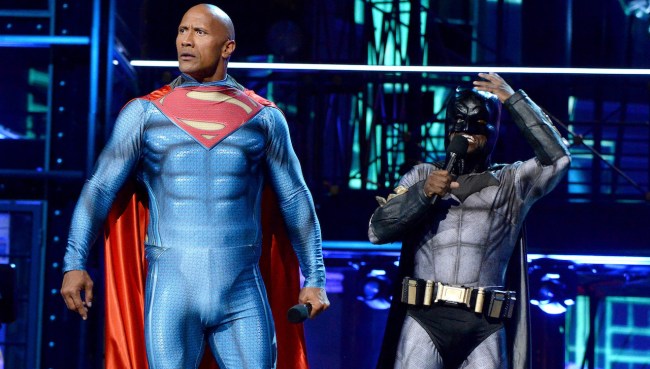 Following a devastating crash on Sunday night that left him in serious condition, comedian and actor Kevin Hart is currently on the mend at a California hospital following successful surgery on his back.

“My first guest today was supposed to be actor and comedian Kevin Hart. So, as many of you know, Kevin was seriously injured in a car accident. He’s OK and recovering, but because Kevin couldn’t be here, one of his good friends stepped the heck up, and I love him,” Kelly Clarkson explained to her studio audience this week.

That’s right, The Rock — despite the fact that he was in Hawaii on his honeymoon after he married his longtime girlfriend Lauren Hashian on Sunday, August 18 — didn’t hesitate to step in for his frequent co-star and obvious genuine friend, once again proving he may be the nicest dude on the planet (and future President of the United States, because Pandora’s Box has been opened).

Let that sink in: the man bailed on a lavish Hawaiian hotel where he was probably drinking world-class tequila and having tons of Herculean sex with his dime of a wife… to go have some small talk with Kelly Clarkson in an artificially lit Hollywood studio. That is a true friend.

When Dwayne @TheRock Johnson leaves his honeymoon early to be the first guest ‼️ #KellyClarksonShow pic.twitter.com/L23UcVrn5p

In addition to their extremely lucrative on-screen partnership — the pair have starred in four films together thus far: Central Intelligence, Jumanji: Welcome to the Jungle, Hobbs & Shaw, and Jumanji: The Next Level — The Rock and Kevin Hart are clearly close in real life, as the two can frequently be seen clowning on each other on social media that way that only true friends can:

The Rock and Hart can be seen together on the big screen again when Jumanji: The Next Level hits theaters on Friday, December 13th.