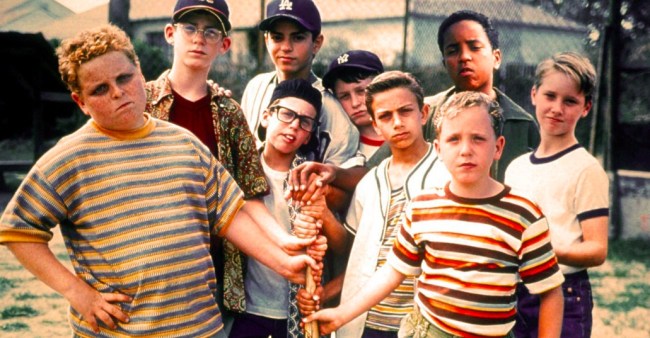 Remember the scene in Happy Days where the Fonz walks up to the mirror to comb his hair, takes one good look, and walks away because his hair is already perfect? I love that scene, not only because it makes me laugh but because it serves as a microcosm to this trend of unnecessary sequels and spin-offs that value a quick cash grab over tarnishing a perfectly good product.

In the latest installment of Things No One Asked For: Twenty six years after the original release of the The Sandlot, one of the greatest movies of all-time, the original cast will reunite for a TV series that will serve as a sequel to the movie.

Why? Fuck if I know.

What's your favorite line from 'The Sandlot'? It's returning as a TV series, with the original cast! https://t.co/cr6rtZdUkI #sunrisers pic.twitter.com/YSz7K6n93U

Director David Mickey Evans told the baseball podcast The Rain Delay that the series will be set in 1984, 22 years after the film’s 1962 setting.

Via The Hollywood Reporter::

“I just sold a Sandlot television show. We’re about to get an order for the first two seasons,” [Evans] told host Cooperstown Kurt. Evans said he couldn’t tell Kurt who was going to stream it, but “I know who’s going to stream it. It doesn’t take a genius to figure that out right now.”

He added, “I already got all the original cast members back. It takes place in 1984, when they’re all, like, 33 years old and they all have children of their own, and that’s all I can tell you.” Evans did not say which of the cast members would be returning; the original movie was set in the San Fernando Valley in 1962.

Remember Benny The Jet Rodriguez? The dude all the girls wanted and all the guys wanted to be like? Yeah, well the dude helped choke out a guy on Halloween of 2015 who he and another off-duty firefighter believed to be acting suspiciously while handing out supposed “drug-laced” candy. The guy reportedly suffered a traumatic brain injury, nearly died, and was just awarded a $7.4 million settlement. The Jet pleaded no contest to misdemeanor battery. Here’s the video of the incident.

With that said, I wouldn’t be opposed to tuning in to see how Wendy Peffercorn aged.