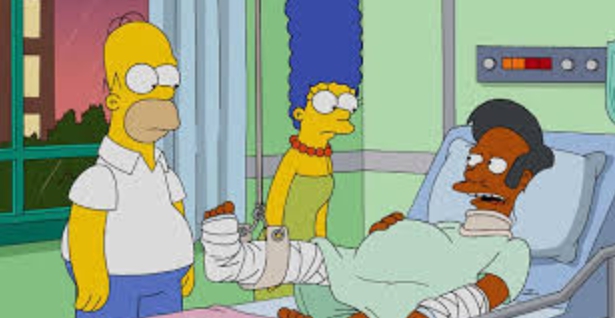 Say goodbye to Apu Nahasapeemapetilon. The beloved character from The Simpsons will be killed off the animated series following an over year-long controversy and the internet voiced some heated opinions on the decision.

The Simpsons producer Adi Shankar made the announcement of the death of Apu on Friday. “I got some disheartening news back, that I’ve verified from multiple sources now: They’re going to drop the Apu character altogether,” Shankar told IndieWire.

The controversy gained popularity in the fall of 2017 when comedian Hari Kondabolu released his documentary The Problem with Apu, which outlined the issues with the Indian character on the show. Apu is voiced by Hank Azaria and many argue that the character is problematic because it enforces Indian stereotypes including owning a convenience store and Apu’s Indian accent.

Creator Matt Groening has defended the character and the show attempted to counter the charges of racism by having Lisa Simpson respond by saying, “Something that started decades ago and was applauded and inoffensive is now politically incorrect. What can you do?”

“It’s come to my attention more and more, especially over the last couple of years, that people in the south Asian community in this country have been fairly upset by the voice and characterization,” Azaria told Stephen Colbert during an interview. Azaria said that he is willing to “step aside” following criticism over the character.

“And I’ve tried to express this before: You know the idea that anybody – young or old, past or present – was bullied or teased based on the character of Apu, it just really makes me sad,” Azaria told the late-night host. “It was certainly not my attention, I wanted to spread laughter and joy with this character. And the idea that it’s brought pain and suffering in any way, that it’s used to marginalize people, it’s upsetting, genuinely.”

Shankar had planned to crowdsource a fitting ending for Apu that “in a clever way subverts him, pivots him, writes him out, or evolves him in a way that takes a creation that was the byproduct of a predominately Harvard-educated white male writers’ room and transforms it into a fresh, funny and realistic portrayal of Indians in America.” However, Shankar revealed that instead, producers will simply quietly retire the character. “They aren’t going to make a big deal out of it or anything like that, but they’ll drop him altogether just to avoid the controversy,” Shakar said.

Fox did not dispute the claims that Apu will quietly be written off the show. The network pointed out to the October 14th episode “My Way or the Highway to Heaven” where Apu was seen in heaven with God.

The hardworking Quik-E-Mart owner and Squishee purveyor who earned a Ph.D. in computer science has been a part of The Simpsons family since the first season when Apu appeared in the eighth episode titled The “Telltale Head.” Apu has been an integral part of The Simpsons during the show’s 30 seasons and 643 episodes. So fans were pissed off when the news that Apu would be killed off the show and disappointed in the way he would be axed in a very unceremonious way.

Giving in to the crazy mob. Weak. Apu, like every other Simpsons character, was a stereotype but he was also positively portrayed… hardworking, family man, embrace American ideals while observing his own culture. He is the model immigrant… unlike groundskeeper Willie. https://t.co/cGc7i49bZS

Thinking of writing an obituary to Apu Nahasapeemapetilon.

Another death in the crusade for political correctness.

So, they're getting rid of Apu in the Simpsons because he's apparently a stereotype. Do you want to start the list of the other characters the Simpsons also needs to get rid of to actually have this principle, or should I?

Twenty-two years ago, Apu's character was the case study for a pro-immigration episode of The Simpsons.
Now it is apparently better that he retreat to the shadows.

Just remember… The writers of the Simpsons are giving Apu less of a send off from Springfield that they did Poochie. pic.twitter.com/tug3jJjaYo

Kondabolu said getting rid of Apu isn’t the right thing to do.

Agreed. There are so many ways to make Apu work without getting rid of him. If true, this sucks. https://t.co/czBDIvaTV0

“If you are a show about cultural commentary and you are too afraid to comment on the culture, especially when it’s a component of the culture you had a hand in creating, then you are a show about cowardice,” Shankar said. “It’s not a step forward, or step backwards, it’s just a massive step sideways. After having read all these wonderful scripts, I feel like sidestepping this issue doesn’t solve it when the whole purpose of art, I would argue, is to bring us together.”