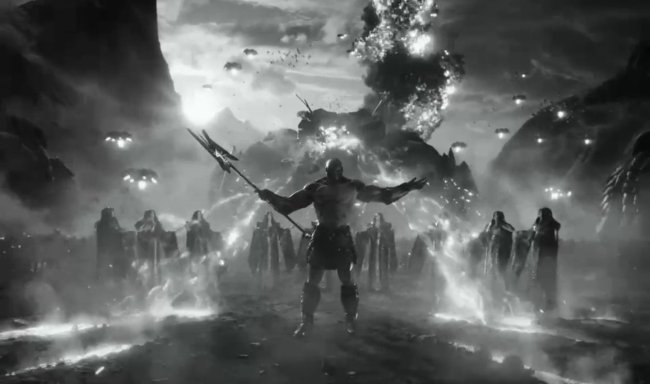 After previously stating that his ideal version of Justice League would be in black-and-white (Why? Because the dude likes to get high on his own supply, that’s why), director Zack Snyder has backed up that assertion by dropping a new black-and-white filtered trailer for the film. Don’t worry, as much as Snyder might want it to happen, there’s a 0% chance Warner Bros. gave him an extra $70 million to make a colorless superhero film.

RELATED- Joker And Deathstroke Will Appear In ‘The Snyder Cut’: What Does It Mean?

In addition to the new trailer, Snyder also released a new image of Steppenwolf, who looks infinitely better than he did in the original Joss Whedon-helmed theatrical cut (the fact that Whedon even bothered tampering with the design just goes to show you what a megalomaniac the guy is).

The trailer is largely similar to the one released during DC FanDome back in August, although it does include a few new glimpses at never-before-seen footage, most-notably a shot of Darkseid and his various minions:

New footage in the black-and-white trailer for #TheSnyderCut 🎥

While The Snyder Cut has yet to be given an official release date, our suspicion is that it drops before the summer, especially considering the wave of comic book movie content that’s set to hit theaters (fingers crossed) in 2021. The project is set to be released in four-parts (likely over the course of four weeks), so if I was Warner Bros., I’d be aiming to dominate the pop-cultural conversation prior to the release of Marvel’s Black Widow on May 7.

We’ll be breaking down the new Snyder Cut footage, the news that Chris Pratt is joining Thor: Love and Thunder, and more on the latest episode of The Post-Credit Podcast. We also dive into in-depth breakdowns of The Mandalorian every Friday, so make sure to subscribe and check that out.