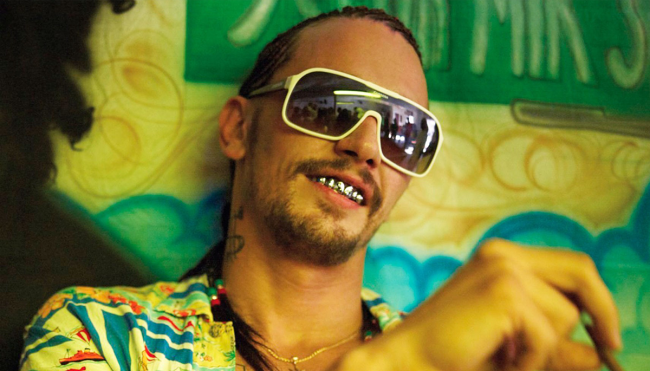 In 2012, Harmony Korine conducted an absolute master class in subversion with Spring Breakers by luring in unsuspecting moviegoers hoping for a carefree cinematic getaway featuring Disney Channel alumni Selena Gomez and Vanessa Hudgens shedding their squeaky clean image after being corrupted by a blinged-out white rapper with cornrows played by James Franco.

After the opening credits roll, viewers are treated to the ultimate spring break montage featuring slow-motion shots of bros crushing beers, girls in bikinis eating popsicles in an incredibly suggestive manner, and others who shed their tops while Skrillex blares in the background. However, if you were familiar with the director’s work, you had to know things were going to take a turn, and it’s only a matter of time until Spring Breakers devolves into a neon-soaked fever dream that features James Franco fellating a gun and singing a Britney Spears song.

Spring Breakers perfectly encapsulates the “Nothing That Happens On Spring Break Is Real” mentality by exposing the college girls at its center to the seedy underbelly of the beach town where they were planning on living the ultimate fantasy (which they do, just not in the fashion they expected.) As a result, plenty of people who went into it expecting a more straightforward film weren’t thrilled with what they ended up getting, but I personally adore what has become one of my favorite guilty pleasures.

When the movie came out, Franco and Korine caught some heat from Riff Raff, the eccentric MTV reality show star-turned-rapper who accused them of shamelessly ripping off his persona. It was kind of hard to argue that wasn’t the case, but according to Seth Rogen, there’s another person who believes they had their image jacked by the actor: Nicolas Cage.

In a recent interview with GQ, Rogen said he had discussions with Cage while The Green Hornet was still in production concerning the role of Benjamin Chudnofsky, the villain who was ultimately portrayed by Christoph Waltz. According to the actor, Cage wanted to embody “a ‘white Bahamian’ with a thick Caribbean accent” he envisioned as “a bald man with hair tattooed on, large prosthetic lips and a voice like Edward G. Robinson” (because of course he did.)

While those plans eventually fell through, Rogen says Cage unexpectedly reached out last year to see if he’d shared the idea he seemed convinced Franco stole despite the fact that A) Spring Breakers came out nine years ago and B) the character has almost nothing in common with his vision for Chudnofsky.