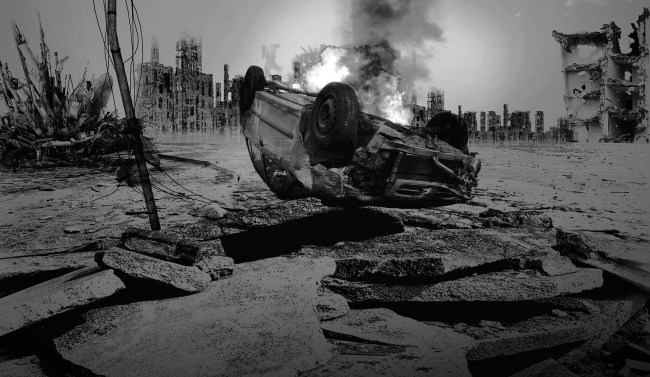 There is something funny going on here in America. I mean, how else do you explain the sudden need for everyone to band together and infiltrate Area 51 (which we definitely need to do), Russian app FaceApp suddenly going viral and stealing our data after pretty much being dormant for two years, and California being hit with two massive earthquakes on July 4th – America’s birthday – and then again on the 5th?

Put on your tin-foil hat, kids, we’ve got some serious theorizing to do.

Let’s begin with the fact that according to the scientists over at the Foley Art Center in Alabama, “the Cali earthquake’s epicenter wasn’t just “near” the Naval weapons base at China Lake. IT WAS THE EPICENTER. It occured 1 mile directly beneath it.”

Coincidence? I think not.

Bee-tee-double-u, China Lake just happens to be a gigantic Navy installation used for research, testing and evaluating weapons such as the Tomahawk missile, AIM-9 Sidewinder, and the explosive Hexanitrohexaazaisowurtzitane (look it up).

Add to that the fact that a certified natural health professional is also leery of the goings-on at the China Lake Millitary Base, and I think we’ve got ourselves a full-blown cover-up happening.

Here's some info on AWESOME "China Lake" Military base that was hit with we will call them "earthquakes" even though I doubt that's what they are. credit Fritz Springmeyer (how is that man still alive?) pic.twitter.com/mSHGHND0ze

Now throw in this take by a former pro ballerina (not just any old amateur ballerina) and there is little doubt that someone doesn’t want us to know about the “tectonic weapons” being unleased underground at the United States Navy’s largest single landholding, covering more more than 1,100,000 acres in Southern California.

Anyone notice the satellite images of the China Lake Navy Base (earthquake epicenter) looks like an A with an arrow going through it. And Free Mason-ish? Perhaps it's just symbolic to the navy which I know nothing about.
#ChinaLakeEarthquake #californiaearthquake #QAnon pic.twitter.com/pbdn4AHxhO

And DO NOT let the government fool you with their cover story about there being a “supervolcano” forming under China Lake.

Now do you understand, THIS is EXACTLY why we all need to join forces and storm Area 51 on September 20 at 3:00am PDT! You just know that it’s a part of this secret U.S. Government program that’s setting off all these dang nukes underground.

The China Lake Naval weapons testing facility is suspiciously close to all those "earthquakes", that's all I'm saying. #anotherearthquake pic.twitter.com/0xtFhK3b5A

#californiaearthquake the first earthquakes were at China Lake Naval Base. This one near Lawrence Livermore Labs. Our govt is developing seismic weapons that they can’t control. Future wars will include earthquakes, hurricanes and other formally naturally occurring disasters