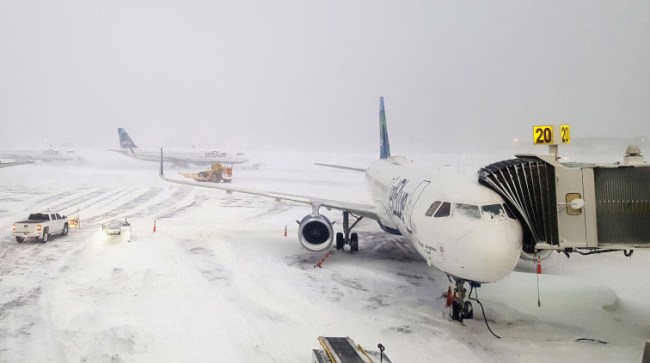 When Winter Storm Grayson hit the northeastern portion of the United States last week and over the weekend, it wreaked quite a bit of havoc. And few places saw more chaos as a result of the bomb cyclone than New York’s John F. Kennedy International Airport.

Not only did the storm cause massive delays and cancellations, there was also massive flooding inside the terminal and two planes even collided with one another.

As a result of all the flight cancellations and the chaos that followed, thousands of bags were separated from their owners with not much way for the airlines to reunite them.

My friend @RyanTopley just texted me this pic from JFK and my entire body is now covered in hives. pic.twitter.com/DmLPWnBw6L

A post shared by The Art of Hospitality (@emilliom1)

On Wednesday, three days after the maelstrom, the number of bags still unclaimed and lying about was reportedly only down to 5,000, with many of them actually sitting outside in the melting snow, reported the Post.

Luggage sitting on the sludge and snow at jfk pic.twitter.com/98r41inw7b

Delta Airlines reported on Wednesday that it still had about 3,800 unclaimed bags and suitcases, saying, “We have established a dedicated phone line to help JFK customers identify and retrieve their checked luggage at 888.977.1005.”

.@Delta now has a dedicated line for JFK luggage — but 90 mins and still on hold. pic.twitter.com/uNVWzT8NhP

Could be worse I suppose. At least these travelers who are still trying to get their luggage back weren’t on that cruise ship that sailed directly into the bomb cyclone. Some lost luggage was probably the least of their concerns.