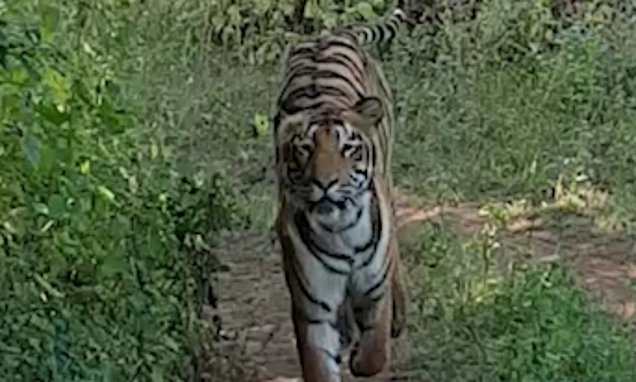 It turns out that when you go on a jungle safari tour that some jungle-type shit may occur such as tigers chasing after you. This is the exact reason that watching the Planet Earth documentary narrated by David Attenborough is better than a real safari where nature can end your existence.

We take you to the Tadoba National Park in Maharashtra, India, where some tourists were curious about nature. But instead of curiosity killing the cat, the cat almost killed the curiosity of these tourists. A video of a tiger chasing tourists in a jeep has gone viral and thankfully nobody was hurt.

The safari-goers recorded the video of the big cat running after them as their jeep attempts to speed away from the tiger. The young tigress is in hot pursuit of the vehicle around every twist and turn as the passengers scream in terror. Finally, the jeep eludes the tigress and the tourists can laugh at their scary encounter with nature. Maybe don’t have open-air jeeps when there are tigers that can jump inside?

The animal reserve says that the tiger was only “playing” and didn’t mean them any harm. They added that if the tigress Choti Madhu really wanted to hurt the passengers she would have attacked. “If she really wanted to attack, she would have pounced on the vehicle,” said the spokesperson for Tadoba National Park, which is about 250 square miles. Which is exactly what a nature preserve would say so that people don’t stop coming to their nature preserve.

The terrifying scene looks exactly like the chase scene in Jurassic Park, except there are no dinosaurs and the T-Rex is replaced with a tiger. And that Jurassic Park was a movie and this was real life. But other than that they are pretty much the same scary situation.