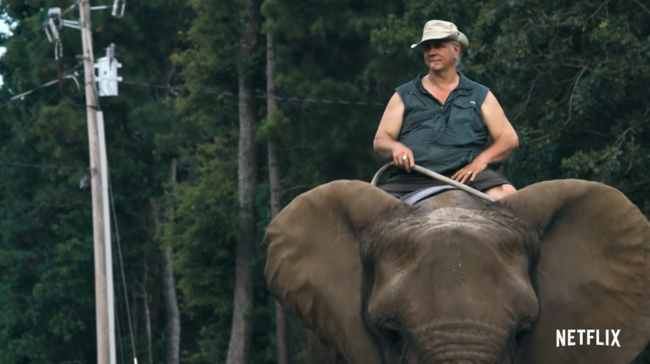 Mahamayavi Bhagavan Antle, aka Kevin Antle or Doc Antle, was one of Joe Exotic’s competitors in the world of big cats with his wildlife preserve in Myrtle Beach, South Carolina.

Doc Antle has been accused of a laundry list of offenses over the years including allegations of animal abuse, the illegal sale of big cats, sleeping with underage females, and running a cult.

However, it was laundering itself that ended up landing the 62-year-old animal trainer and private zoo operator in jail last week.

Antle was arrested by the FBI and booked into jail in Horry County, South Carolina last week on charges of money laundering, prosecutors announced on Monday.

According to the New York Post, Antle is accused of laundering $505,000 in cash with his business partner Andrew “Omar” Sawyer over a four month period.

The FBI arrested Doc Antle of Tiger King fame for, of all things, money laundering

The United States Attorney’s Office in South Carolina stated in a media release, “According to the complaint, which was unsealed today in a federal courtroom in Florence, Antle is the owner and operator of The Institute for Greatly Endangered and Rare Species (T.I.G.E.R.S), also known as the Myrtle Beach Safari. The Myrtle Beach Safari is a 50-acre wildlife tropical preserve in Myrtle Beach. Sawyer is Antle’s employee and business associate. The complaint alleges that over the last four months, Antle and Sawyer laundered $505,000 in cash they believed to be the proceeds of an operation to smuggle illegal immigrants across the Mexican border into the United States.

“Specifically, according to the complaint, Antle and Sawyer would launder the cash by providing checks from a business controlled by Antle and a business controlled by Sawyer. Those checks falsely claimed they were remitted for construction work being performed at the Myrtle Beach Safari, when in reality the checks were simply a means to allow the recipients to appear to have legitimate income. In exchange, Antle and Sawyer received a 15% fee of any amount laundered.”

He is also accused of inflating the tourist numbers at his Myrtle Beach Safari in an effort to conceal the cash gained from these activities.

Antle and Sawyer each face a maximum of 20 years in federal prison if found guilty of the charges against them.

Fans of the show Tiger King, as well as Antle’s many detractors, had some funny reactions to the news of his arrest.

I don’t care what it’s for. This is so satisfying.

Has ANYBODY from Tiger King not been arrested at this point?

When are they gonna get that damn Carol Baskin?