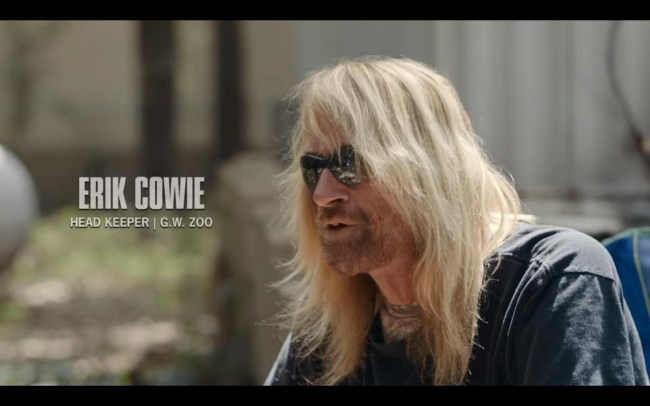 Since the global explosion of Tiger King, head zookeeper Erik Cowie has endured the wrath of online trolls cyber bullying him over his sparse dental situation.

He said in the Tiger King and I spinoff episode in April that he hadn’t even watched the show, but it was impossible to avoid the online barbs about his chompers.

‘No matter what anyone says, yeah, my teeth are jacked up I’m sorry, I’m old man,  it’s what happens, and it’s going to happen to you. ‘And no, I don’t do meth, I never have, I like sleeping too much. I used to have a drinking problem and now I do not.

Cowie also claimed that despite the speculation, no, he does not do meth: ‘clean living and loving Jesus’ were his words exactly.

I am pleased to announce that the trolls will be silenced upon learning of Cowie’s brand new set of tusks.

Somewhere in Hollywood, Simon Cowell and his blinding chiclets nod in approval.

Remember that episode of friends when Ross had his teeth whitened? Seems like Simon Cowell went to the same dentist. 😬 pic.twitter.com/JMsI9KRTst

Sources close to the GW Exotic Animal Park in Oklahoma tell TMZ … though Erik interacts with the public daily — leading tours and answering questions about all the animals — he has a hard time connecting with people, because he’s always been self-conscious about his smile and felt bad about his teeth.

We’re told Jeff [Lowe] and his wife Lauren wanted to do something nice for Erik — who’s still the head zookeeper like he was for Joe Exotic — for all the hard work he does at the park.
So, our sources say Jeff surprised Erik and flew him down to Florida, where he’d arranged for him to get permanent teeth implants installed at Done In One … which does the job in 48 hours.

Oh MY ASS Jeff Lowe wanted to do something “nice” for Erik. Jeff Lowe only sees dollar signs and he knew more teeth equals more zoo goers. No one wants to talk to a jack-o-lantern.

And, it’s been reported that Lowe didn’t even end up paying for the implants because the dental center did it on the house.

Regardless, Cowie looks like a snack and he ain’t the only one.