Ever Seen A Tiger Shark Attacking A Sea Turtle? You Have Now 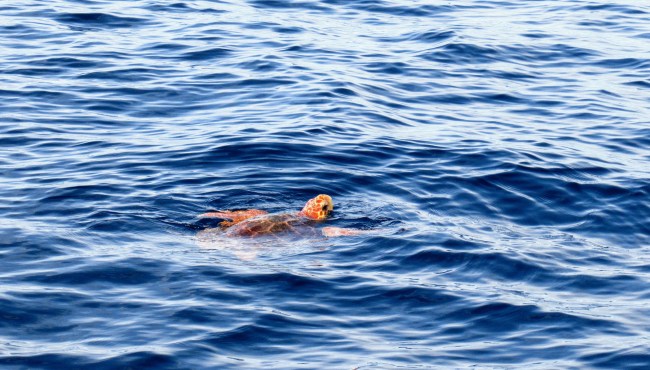 I’ve always heard that Tiger Sharks will ‘eat anything’ and everything. They’ve been known to eat fish, squid, turtles, birds, sea snakes, crustaceans, and more. The species has a reputation of being a ‘garbage eater’ because people have found all sorts of human trash in the stomachs of tiger sharks, items like license plates from cars.

I haven’t personally seen a tiger shark eat anything in the wild. In fact, I’ve only ever seen one in person while I was jet-skiing with a friend near Staniel Cay Yacht Club in The Bahamas and we were able to cruise around and watch the shark for a while because the water was crystal clear. Coincidentally, this footage below was filmed in The Bahamas.

Kai Owen was having himself a day. He and his buddy went out ‘duck shooting, wahoo fishing, and some ocean diving with a yellowfin tuna’ and along the way they found this huge tiger shark straight-up trying to eat this loggerhead sea turtle. They stopped the boat, the turtle was clearly trying to get away from the shark and saw the boat as its only lifeline. The guys didn’t want to intervene too much because these are protected species but they eventually took the turtle into the boat and relocated it to safety nearby.

I’ve got two clips here, the shorter one shared on Instagram as well as the full YouTube video below. The shark action starts around the 6:24 mark on YouTube. I’ve tried ot set the video to start then but you can skip ahead if that doesn’t work. Check out one of the craziest wildlife encounters filmed this year:

This footage was from over a week ago and I apologize for just now getting around to sharing it with you bros. I’ve been all sorts of busy lately and had this saved for a week now to put up on the website but kept forgetting to get to it.

They later told Fox News and Yahoo! they relocated the turtle a few miles away (5KM) from where they found it which, all things considered, feels like the right move. They didn’t intervene that much.

I’m sure a wildlife official who goes 100% by the book wouldn’t approve of this but they saw an endangered sea turtle in distress and the turtle looked like it was begging for its life by trying to get into the boat so they moved it a little ways away. The turtle was likely still exhausted and traumatized from the shark attack so there’s no telling what happened once it was back in the water but they at least gave the endangered turtle a fighting chance.