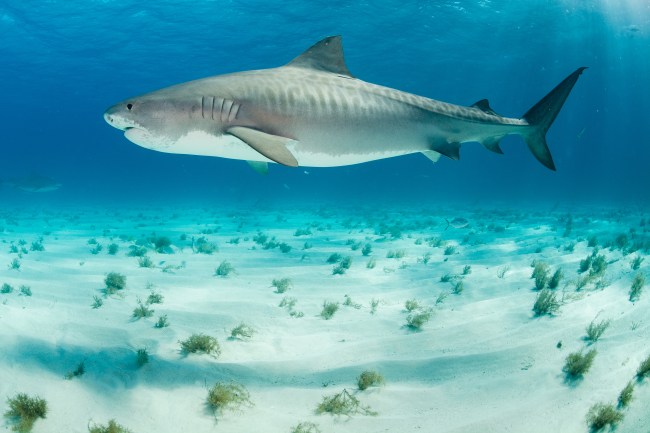 The oceans are pure carnage. The creatures of the ocean don’t care if their fellow ocean dwellers have a family, a handicap, or a peaceful disposition. If you don’t got your head on a swivel, you’re just meat swimming on borrowed time. And when you have the added pressures of humans looking to pluck you out of the ocean so they can toss you on a grill, I gotta image the anxiety levels underwater are astronomical. I wonder if they got CBD down there. Should start listening to the Joe Rogan Podcast.

Another example of how unforgiving the oceans can be washed up on a beach just a few miles north of Hilton Head, South Carolina last weekend.

Bryan Frazier, a shark biologist at the South Carolina Department of Natural Resources, submitted the below photo of a mutilated, nine-foot juvenile tiger shark that appears to have its stomach cut open and its teeth and jaw removed.

Tiger shark killed in port royal sound, jaws cut out and gutted. I’m all for keeping mahi, grouper, snapper, etc. but to kill an old fish just for the jaws is a bit selfish. pic.twitter.com/ItUyD85bG3

Frazier told The State that he estimates the shark was around 200-300 pounds and had been gutted open by a human being.

“They eviscerated it … with a straight-line cut that wasn’t done by an animal,” Frazier told the outlet. “It’s really a strange thing to do.”

“It’s a bit perplexing to see why anyone would do this,” he said. “You hate to see anything killed for no reason.”

Tiger sharks are a supreme predator off the Lowcountry coast, but are legal to catch and kill in South Carolina waters, The State reports. The law permits fishermen to kill one tiger shark a day if it’s longer than 54 inches.

And we get insulted when a shark takes a chunk out of us. All is fair in love and war.