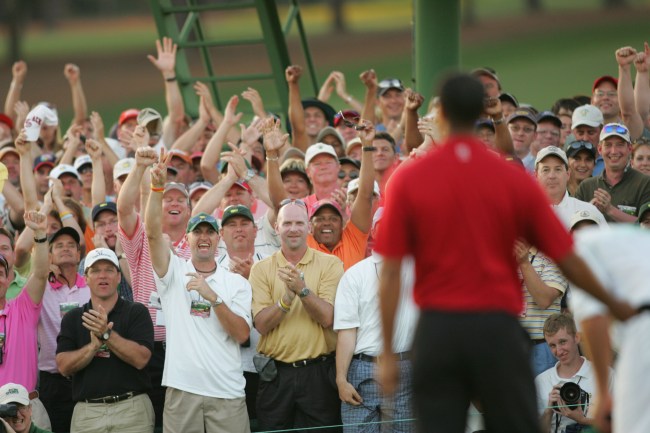 When it comes to Tiger Woods, there is no shortage of celebratory moments. But in looking back through Tiger’s greatest hits, we almost always focus on the man himself. As it turns out, there are a few tremendously uncomfortable/fun scenes that unfold on the periphery of these scenes. Here are some of the greatest supporting characters of Tiger Woods’ greatest moments. 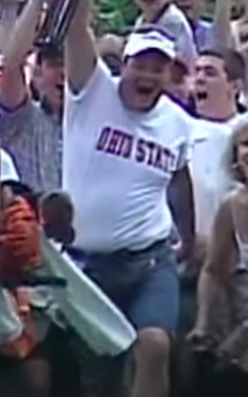 Forget Colonel Mustard. We’ve got Mr. Ohio State, with the folding chair, at Memorial. Because his vertical is only four inches, his shirt stays tucked tighter than an Under Armour mannequin at Dick’s Sporting Goods. This compression is important because otherwise, his calves would explode with each hop. It’s hard to know whether he was sitting in that folding chair before he picked it up to brandish it like a torch. But if he somehow pulled that out from under himself, folded it, and brandished it that quickly, you’d have to say he probably works in the folding chair business. 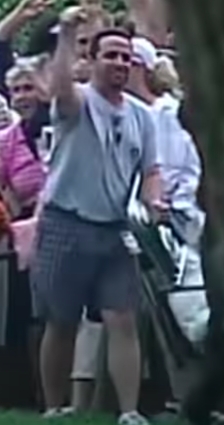 Another disciple of the “take your folding chair with you” school of thought. Like Ohio State, this guy’s shirt is held down with garter straps. Take those shorts off and you’ll find some sexy, lacy, and probably saturated with the sort of swampass that breeds BIG mosquitos. That point says “you da man,” but those shorts say Jos. A Bank 5-for-1 spesh. 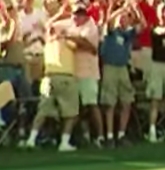 Yellow shirt spikes his hat. The force of that spike nearly causes him to fall over. Then he does that thing that guys do sometimes where, when they’re laughing really hard with a friend, they kinda wrestle/fall into each other? Sort of like the Donnell Rawlings gif from the Breakfast Club?

Luckily, his pal in pink is there to catch him, and they bounce together in ecstasy. Seen through a certain lens, it’s adorable—half hug, half tickle fight. But it’s also the quintessential dads-celebrating-Tiger’s greatness moment ever. Talk about second-hand joy/cringe.

So, so much fun to be had in this clip. It’s a feast of dads. Let’s start with the outfits: I count FOUR sweater-vests. Big range in terms of how deep the Vs go. Gotta believe most of these guys shop at those PGA stores you see in airports. Bet they make a killing in there.

Second, the laughs when they first try to move the rock and it doesn’t budge. I want to drink those laughs in all day long. “Hahaha, whelp, that rock fooled us!” Good thing they still believed in themselves. Someone was there to lead. Someone said “guys, we can actually do this, don’t give up.” And something tells me that leader was this guy:

Guy is jacked. No two ways about it. That turtleneck-sweater vest combo is leaving very little to the imagination. I’m not complaining, and neither is Tiger.

Next, the sweaters-tied-around-the-waist look. Are they hot? Or just trying to look hot?

Every single man in this group has told the story over twenty times by now. “I was there, with my sweater tied around my waist, moving the rock.” Some guys did more, some guys were just there for show. But in the end, this is the closest any of us will ever come to recreating that biblical moment where the rock was moved for Jesus’ resurrection. Or something.