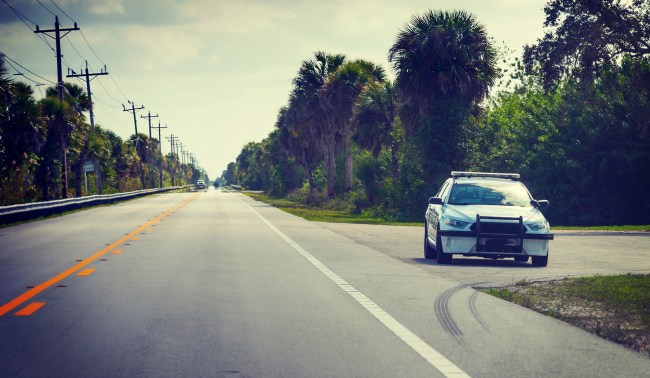 A Pasco County, Florida TikTok star with over 4 million followers was arrested last weekend after leading police on a high-speed car chase reaching 100 MPH. Police released footage of Damaury Mikula burning out the tires of a Dodge Challenger before leading a trooper on a 100 MPH chase.

Pasco County is just north of Tampa and is definitely one of those places that produces a disproportionate amount of Florida Man news compared to other tamer parts of the Sunshine State. A report from Yahoo! News paints a pretty damming picture for Damaury Mikula.

He allegedly spun his tires at a red light, took off and ran a red light, failed to stop when the Highway Patrol chased him at 100 MPH. After he was eventually apprehended, Florida Highway Patrol trooper W. Kelly says Mikula told him that he “makes a lot of money, and has a fast car and he can do whatever he wants.”

According to local news WFLA, he was charged with ‘eluding the police with disregard of safety to persons or property, reckless driving, and racing on a highway.’ The arrest took place on Friday and on Sunday, Damaury Mikula released a TikTok video suggesting he was going to take some time to work on himself.

Unfortunately for all of us, I’m down in Florida and Frontier internet is out today even if the company hasn’t acknowledge it yet so I can’t hop in the comments to see what people are saying as my computer is struggling to do anything in the past 30 minutes tethering from my phone.

One thing I find interesting about this is he very deliberately avoids saying the words ‘sorry’ or ‘apology’. He’s taking some time to work on himself but I’m not seeing any words there about remorse for his actions which, honestly, I don’t care about but I’m not a judge or prosecutor looking to see genuine remorse from someone.

I’ve never been in a high-speed car chase (***in the United States) so I’m not sure what went through his mind or anyone else’s in the US when they see those lights and smash the gas. But purely from an influencer perspective, I can’t imagine too many brands would want to have sponsorships attached to someone running from the police like that.