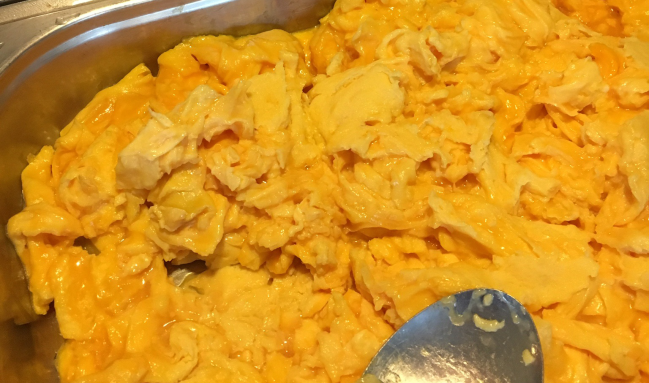 A TikTok video that has now been viewed almost 21 MILLION times showing how a woman makes hotel eggs for a breakfast buffet is turning people’s stomachs.

The video, which has received almost 19,000 comments – most of them with people being revolted, shows how scrambled eggs are prepared in a commercial kitchen for a hotel buffet.

The TikToker who posted the video, @treyrey7, begins by pulling some blue bags out of the fridge or freezer. She then pops a few holes in the bag, and tosses the whole thing into a microwave.

Once the “eggs” are done “cooking” she dumps the contents of the bag into a tray of water, sticks them in an oven to warm them up even more, and then puts the now twice-warmed conconction into another warming tray for the hotel guests out of which they can shovel the eggs onto their unsuspecting plates.

Related: TikToker Blows Millions Of Minds With The Way She Uses Ketchup Packets

Reactions to the hotel eggs video in the comments section were predictably negative.

“I’m gonna show this to my mom who always forced me to wake up at 6am for the hotel breakfast,” the top commenter wrote. They received almost 200,000 likes.

“You’ve changed the game. Hotel breakfast is cancelled,” wrote another.

Not everyone was disgusted with the hotel eggs though.

So y’all gonna stop eating processed foods and McDonald’s too?” asked another viewer.

Others were just worried @treyrey7 was going to lose her job for posting the video to TikTok.

No need to though as she replied, “Still here babyyyyy me and the bosses laughed about it.”

For what it’s worth, powdered or liquid eggs are really not so terrible. According to BakeRite, their powdered eggs carry “all the usual nutritional benefits of a fresh egg, without the worry of it going bad! They offer a good source of protein, immune-boosting properties, and antibacterial qualities.”

Of course, sensing she may be on to something, @treyrey7 later posted another TikTok video of her making the hotel breakfast.

This is all I prepare i’m only a night receptionist, breakfast staff do the rest 👍🏾 ##maxplumpjump ##fypシ ##NeverJustAGame