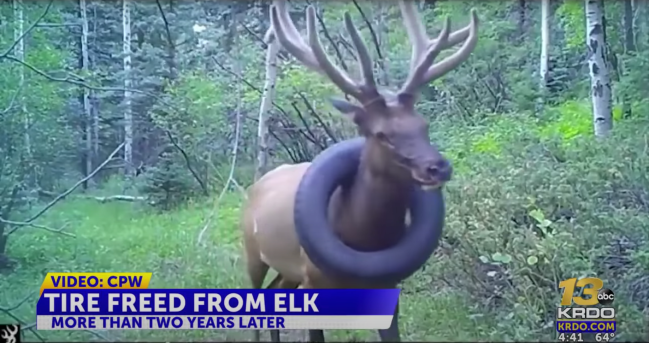 Colorado Parks and Wildlife (CPW) first became aware of a young bull elk with a tire wrapped around its neck in July of 2019. Now, more than two years later, that tire has been removed.

The 600-pound elk turned four years old earlier this year and has spent almost half of its life with his head wedged in a tire. After the first sighting, wildlife officers did not expect to get their hands on the elk because it lived in an extremely rugged part of the state.

“Being up in the wilderness, we didn’t really expect to be able to get our hands on the elk just because of the proximity or the distance away from civilization,” CPW officer Scott Murdoch said in a press release. “It is harder to get the further they are back in there.”

Obviously, they were unsuccessful. Until this past weekend, that is.

After more than two years and four unsuccessful attempts to tranquilize the elk earlier in the week, the officers were able to subdue the elk on Saturday. From there, Officer Murdoch and his colleague Danson Swanson went to work to remove the tire.

Because the elk had grown significantly over the past two years, they had to cut the antlers off of the tranquilized elk to slide the tire free. They tried to cut through the tire, but they were ultimately unsuccessful.

“We would have preferred to cut the tire and leave the antlers for his rutting activity, but the situation was dynamic and we had to just get the tire off in any way possible,” Murdoch said.

Even still, it was a tight squeeze.

“It was tight removing it,” Murdoch said. “It was not easy for sure, and we had to move it just right to get it off because we weren’t able to cut the steel in the bead of the tire. Fortunately, the bull’s neck still had a little room to move.”

To make things even more difficult, the tire was full of nearly 10 pounds of debris and dirt. Between the tire and the antlers, the 600-pound elk lost nearly 35 pounds in a matter of minutes.

And there was more good news!

The elk, which has had a dirty tire around its neck for more than 800 days, could have been in rough shape— particularly in the area where the tire was. And yet, despite lugging around the tire for such a long time, the elk was in good health.

“The hair was rubbed off a little bit,” said Murdoch. “There was one small open wound, maybe the size of a nickel or quarter, but other than that, it looked really good. I was quite shocked to see how good it looked.”

Swanson was ultimately the one who was able to successfully tranquilize the elk and Murdoch arrived to aid in the removal operation. The entire thing took just a few minutes and the elk was set free after administrating a reversal to wake it from sedation.

Don’t worry, although his rutting season might be hindered this year, the elk’s antlers will grow back and he will be just fine without them.