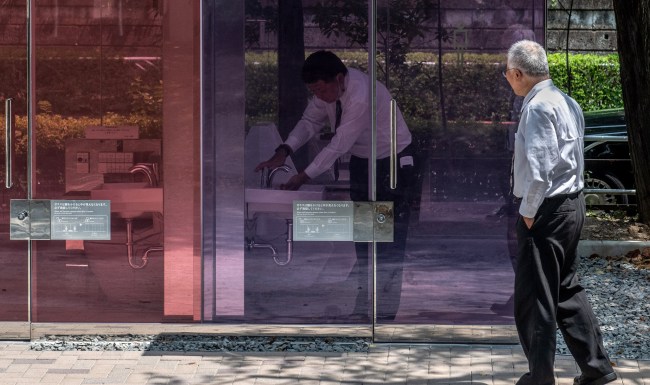 Japan is back at it again, inventing things, and actually using them, that not one single person actually asked for. This time they have created and installed public restrooms with transparent walls in a couple of parks in Tokyo.

That’s right. Restrooms with transparent walls. In public parks. You so cray-cray, Japan.

The restrooms were designed by Shigeru Ban Architects as part of The Nippon Foundation’s Tokyo Toilet Project, reports the UPI.

Why would they do such a monumentally bizarre thing? Well… apparently it is so people can quickly determine whether the restrooms are clean and/or occupied and totally not to give those guys who used to buy used panties from vending machines something new to do.

“There are two things we worry about when entering a public restroom, especially those located at a park,” reads the Tokyo Toilet Project’s website. “The first is cleanliness, and the second is whether anyone is inside.”

“This allows users to check the cleanliness and whether anyone is using the toilet from the outside,” the website continues. “At night, the facility lights up the park like a beautiful lantern.”

While it sounds crazy, because it is, it’s not completely insane. The walls turn from transparent to a frosted opaque when the person locks the door.

However, that’s assuming that people will remember to lock the door, because once inside the user of the restroom cannot tell whether the walls appear transparent or frosted. Whoops!

Each set of restrooms comes with one for men, one for women, and one a mixed-use toilet.