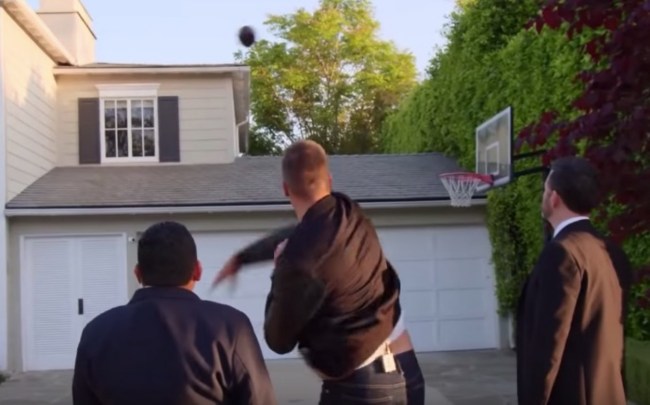 Ben Affleck, a mutual close friend of both guys, would appear to try and intervene but it never worked and the prank war would go back and forth with Jimmy being an asshole to Matt and Matt being an asshole to Jimmy. This isn’t like the Jimmy Kimmel-John Krasinski prank war that’s all done in good spirit. Kimmel and Damon are legitimately assholes to each other.

Tom Brady was a guest on Jimmy Kimmel Live last night. He opened the segment talking about how he stays in shape while getting older, crazy fans, and his desire to win (clip below) but they also hopped in a cab to show up at Matt Damon’s house to throw things through his window:

Like I said before, I bet these guys are secretly best friends when they’re not on camera but I have no proof of that.

Here’s that second clip, the one where Tom Brady talks about how he stays in shape in the offseason, deals with obsessed Patriots fans, why he doesn’t care about being the highest-paid player in the NFL, and his desire to keep winning despite being the winningest quarterback in NFL history.

Tom Brady has lived one of the greatest lives of any athlete in history. He’s the most decorated quarterback the NFL has ever seen with 6 Super Bowl rings. You have to be intrinsically motivated on an insane level in order to keep it all going after marrying the most successful supermodel on the planet and becoming the undisputed GOAT of the NFL but Tom Brady keeps on pushing. It’s insane.