Tom Cruise Hangs Off The Side Of A Damn Plane (Again) In Unearthed Footage From The New ‘Mission: Impossible’ Movie 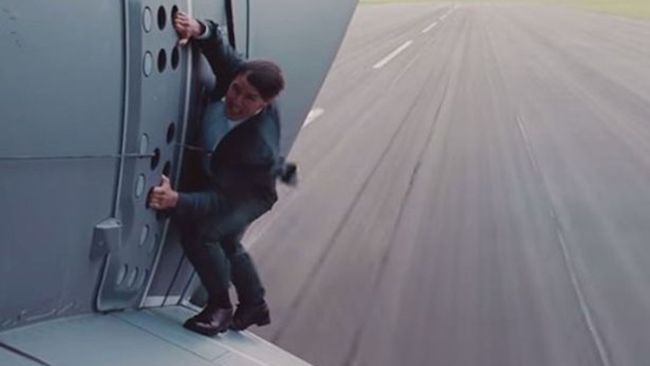 Despite the fact that Tom Cruise is now 60 years old, the Hollywood legend isn’t showing signs of slowing down anytime soon, as his latest film, Top Gun: Maverick, has gone on to become one of the most successful in the history of the medium as it’s now grossed over $1.35 billion at the global box office.

And with two more Mission: Impossible films — Dead Reckoning Part One and Part Two — set to release in 2023 and 2024, fans can certainly expect to see more of Cruise’s trademark cinematic insanity for years to come.

While the Mission: Impossible franchise — which seems to get better with each passing film — certainly doesn’t need any further proof that it’s one of the best action series out there, Cruise is certainly doing his damnedest to remind fans of that fact as recently unearthed footage from CinemaCon shows him HANGING OFF THE SIDE OF A PLANE to promote the upcoming movie.

This, of course, isn’t the first time that Cruise has seemingly risked his life for the sake of a Mission: Impossible movie, as it seems to become something of a habit of his over the years.

Unearthed CinemaCon footage shows Tom Cruise hanging off the side of a plane to promote the release of Mission: Impossible – Dead Reckoning Part One