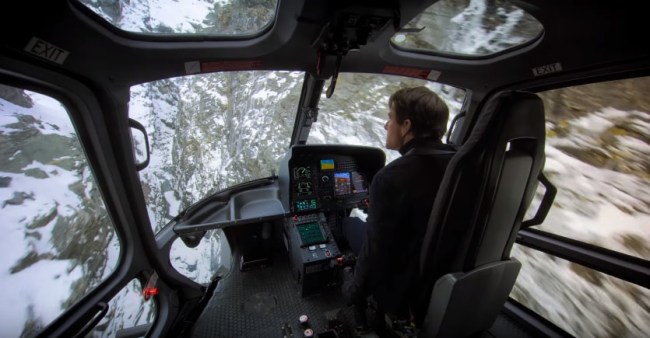 In Tom Cruise’s latest movie stunt, the 55-year-old actor actually performed a dangerous maneuver that would be daunting for a professional helicopter pilot let alone an actor with little flying experience. Instead of taking the easy way out and having the scene created with a green screen and CGI, Cruise wanted to perform the stunt himself. Cruise is not a pilot, so in order to accomplish this stunt, Cruise would have to spend hundreds of hours training to be a very capable helicopter pilot.

Cruise didn’t just pilot the helicopter, but did so within feet of another chopper and extremely close to the sides of mountains. Cruise pulls off an insane 360-degree downward spiral that shot the copter towards the ground. Not only is Cruise acting, but he is also piloting the copter during an intense stunt, but is also the camera operator. All at the same time. Impressive.

Here is the synopsis for Mission: Impossible – Fallout: