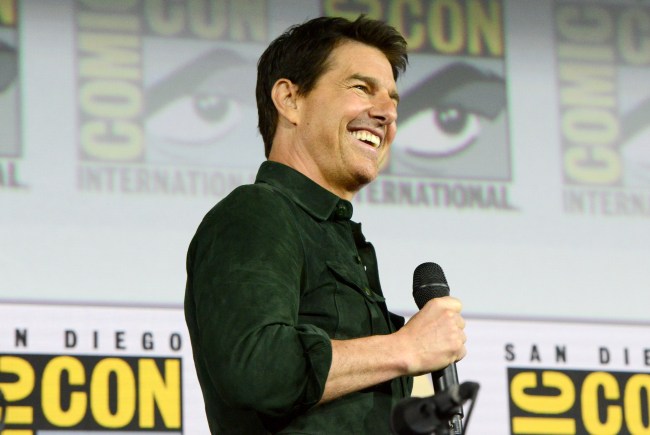 Tom Cruise, baby. Just a regular Joe! Might as well be your neighbor. Need to borrow some eggs? Tom’s your guy. Need help getting your cat down from a tree? At 5’7”, Tom’s not your guy, but he’ll lend you his ladder. Need help navigating the treacherous bridge between OT III: The Wall of Fire and OT IV: Drug Rundown? Tom is definitely your guy.

Why, then, would we be surprised that he enjoys going to the movies? Everyone loves the movies. You’re in London, it’s a rainy day, you hail a black cab and catch a matinée of Chris Nolan’s highly anticipated thriller Tenet. What could be more normal?

Well, watching Tom Cruise do normal civilian things is… unsettling. The dude is one of the top three or four most famous, successful people on earth. Everyone knows he spends his days off free-soloing volcanoes and shark diving with shrimp tied to his ball bag. Therefore, to watch him arrive at the movie theater and say “here we are… back to the movies” was like watching a politician shoot a campaign ad surrounded by a family he rented for the day. You know something isn’t right. You know he’s trying to appear normal. And then you start to wonder what’s real and what isn’t.

Did he construct this fake movie theater on some foreign planet, ferrying a bunch of extras in using a SpaceX favor from Elon? Is this a simulation? Even the way he claps before the movie starts sent chills down my spine.

We know Tom Cruise has a private movie theater—whose sound system and picture quality BLOW whatever AMC Loews is doing out of the water—in at least eight of his (ballpark) 12 houses. We know he can get screeners of Tenet with a quick text to his agent. So why did he hire a videographer to follow him through the mundane merry-go-round of attending a civilian movie theater?

Don’t get me wrong; I love Tom Cruise. I don’t care at all about his unusual religious beliefs or the fact that he somehow found the well from Tuck Everlasting and doesn’t age.

But Tom, if you want people to believe that you’re just like the rest of us, you’re barking up the wrong tree. I won’t buy it. Not for a second. This movie theater isn’t real, that cab wasn’t real, and all of this was just an effort to divert attention away from something wild and strange and unusual. Now it’s up to us to figure that out.