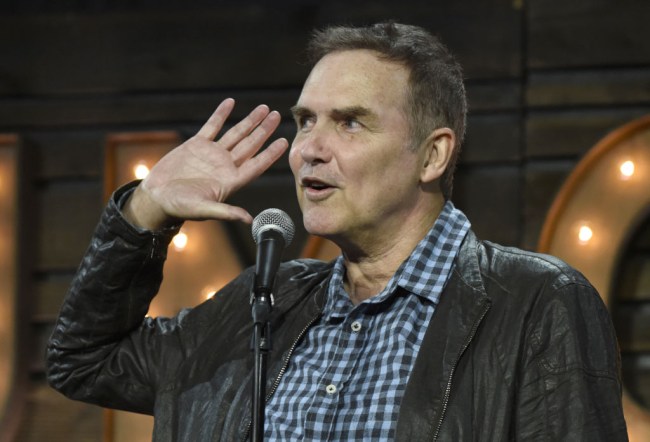 Just three days before his talk show premieres on Netflix, Norm MacDonald has found himself in the mud. The comedian is facing backlash for comments he made about the #MeToo movement and sympathizing with his friends and offenders Roseanne Barr and Louis C.K.

In an interview with The Hollywood Reporter, McDonald said he was “happy the #MeToo movement has slowed down a little bit.” He went on to show support for Roseanne, who gave him one of his first writing gigs on the original Roseanne, and Louis C.K., who wrote the forward for  Macdonald’s 2016 book, Based on a True Story.

“Roseanne was so broken up that I got Louis to call her, even though Roseanne was very hard on Louis before that,” he said in the interview. “But she was just so broken and just crying constantly. There are very few people that have gone through what they have, losing everything in a day. Of course, people will go, ‘What about the victims?’ But you know what? The victims didn’t have to go through that.”

The deadpan comedian went on to question the idea of believing all women in the midst of sexual misconduct allegations, saying “that Chris Hardwick guy I really thought got the blunt end of the stick there.”

MacDonald’s comments caused NBC to cancel his appearance on Jimmy Fallon’s Tonight Show Tuesday, with the network releasing the below statement:

“Out of sensitivity to our audience and in light of Norm Macdonald’s comments in the press today, ‘The Tonight Show’ has decided to cancel his appearance on Tuesday’s telecast.”

Roseanne and Louis have both been very good friends of mine for many years. They both made terrible mistakes and I would never defend their actions. If my words sounded like I was minimizing the pain that their victims feel to this day, I am deeply sorry.

Norm’s talk show, Norm MacDonald Has A Show, debuts this Friday on Netflix. It will be interesting to see if he broaches the controversy.

Imagine how MacDonald’s hosting at the 1998 ESPY’s would fare today. I’m guessing it would be poorly received.