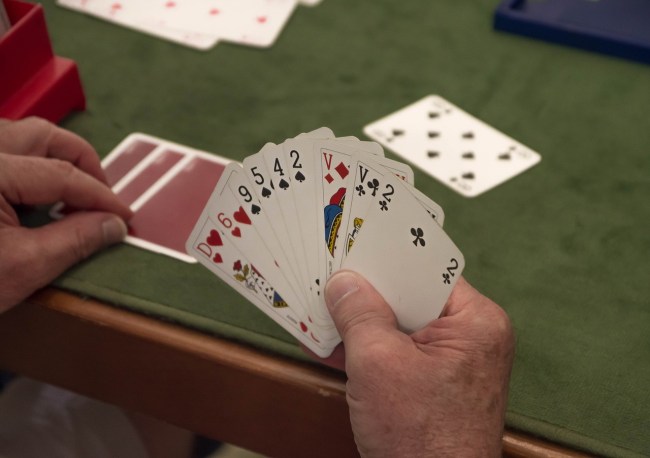 The World Bridge Federation announced on Friday that Geir Helgemo, the #1-ranked bridge player in the world, has been suspended after testing positive for two banned substances. Let me remind you, bridge is a card game generally played by your grandmother and her friends at the nursing home as they nibble on Planters Cheez Balls and try to delay meeting their maker.

Are they playing with gargantuan sized cards that are 6-foot-tall where strength would give you an advantage?

Despite being centered around a card game, The World Bridge Federation is a member of the International Olympic Committee, which means that the players in the Federation must adhere to IOC guidelines and World Anti-Doping Agency’s rules. That means that the “athletes” must be tested for banned substances. Usually, the only test given to bridge players is how many cups of prune juice can they drink to swallow their blood pressure pills.

Last September in Orlando, Helgamo tested positive for synthetic testosterone and clomifene, which is a female fertility drug. Good luck to Geir on his quest to become pregnant. You may notice that these drugs affect a human physically, and probably don’t make you a better card player, unless you’re going to go on a roided-up rage and flip the table after Margaret beats you again. Wait until this dude hears about Adderall.

Kari-Anne Opsal, who is the president of the Norwegian Bridge Federation, issued a statement to shocked fans of the “sport” everywhere:

“Geir Helgemo represents Monaco, but is also a member of the Norwegian Bridge Federation. He has previously played for the Norwegian national team and is our biggest star. Many in the bridging community know Geir and appreciate him. It is his responsibility not to take drugs that are on the doping list, although in this case, they are not performance enhancing in bridge. I feel with Geir in this situation and hope that he will come back stronger.”

This is not Helgemo’s first time of breaking the rules. The player from Norway was sentenced to prison for tax evasion, which is a pretty good place to hone your bridge-playing skills. Better check grandma

The 49-year-old Geir is suspended from the game he loves until November 20, 2019. Perhaps Geir Helgemo should try out chess boxing during his suspension.