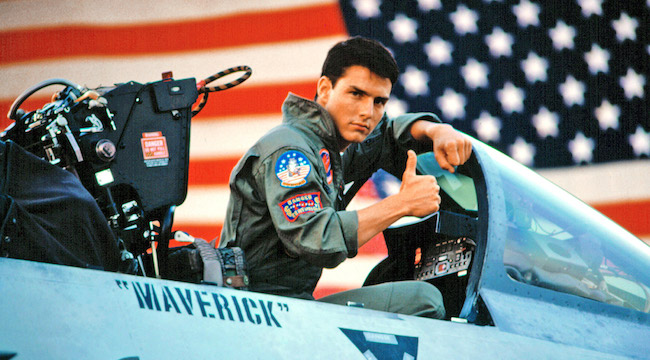 Top Gun was released on May 12, 1986, and many have wondered what kind of jet fighter or drone Capt. Pete “Maverick” Mitchell will pilot in the highly anticipated sequel (Rest assured it won’t be a cargo plane full of rubber dogsh*t out of Hong Kong). At the end of 2018, we reported that Maverick would fly an F/A-18 Hornet after this production photo from the set of Top Gun: Maverick was leaked.

Maverick and Goose flew an F-14A Tomcat in the original Top Gun, but is it possible that the decades-old jet fighter could return for Top Gun 2? According to new production photos that have leaked, there will be at least one F-14 in Top Gun: Maverick.

An F-14 Tomcat Has Returned To The Deck Of An Operational Carrier For Top Gun 2 Production https://t.co/dMeMzlrrab pic.twitter.com/0QuiRy8AdZ

This is interesting since the Tomcat, which first deployed in 1974 with the U.S. Navy aboard USS Enterprise, was retired from the U.S. Navy’s active fleet on September 22, 2006. The F-14 Tomcat is not flyable in the U.S. and is only in active service in one country, Iran. Then there is the exorbitant costs of flying an F-14, plus all of the bureaucratic red tape it would take to get one of these bad boys off the ground.

This particular Tomcat is reportedly F-14A #159631, the 178th Tomcat Grumman built. This jet fighter has been living comfortably at the San Diego Air And Space Museum’s Gillespie Field Annex in El Cajon, California, for years. There are some new additions for the Top Gun movie, the F-14 now has a phoenix symbol painted on it.

Neato, this exact F-14 i photographed a few years ago is now being used in Top Gun 2. Was tucked between a MiG-21 and an F-16N at Gillespie Field. https://t.co/Ed8rC5iE1X (cc @Aviation_Intel) pic.twitter.com/WwhmVE6NxP

The Drive points out that the F-14 won’t just be in the new movie for a cameo.

The fact that the F-14 is set up to appear as if it made an emergency landing into the ship’s barricade indicates that this is likely the culmination of a tense action sequence in the film. The barricade is a nylon net that is attached to the ship’s arresting gear system that ‘catches’ a stricken airplane that cannot, or has a very low probability of, ‘trapping’ normally aboard the ship by catching one its arresting wires.

This sounds like you will plenty of CGI dogfights in Top Gun: Maverick instead of actual footage. You can see a specs comparison between the F-14 and the F/A-18 HERE.

Tom Cruise on the set of the upcoming 'Top Gun: Maverick,' looking like he hasn't aged a year since 1986. pic.twitter.com/QntrtYNg4I

Top Gun: Maverick soars into theaters on June 26, 2020, with Val Kilmer back as the Ice Man, plus Jon Hamm, Jennifer Connelly, and Ed Harris.