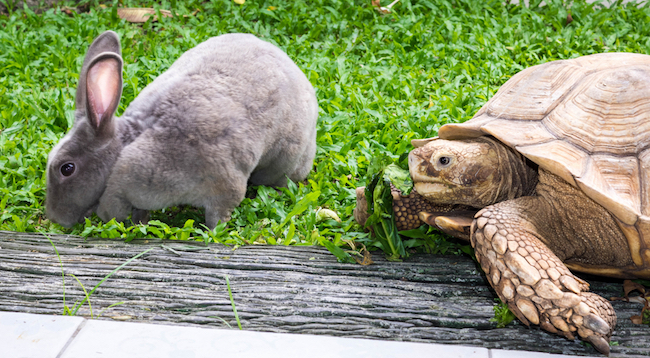 You can argue all day long about what the most storied rivalry in sports is, and I’m sure some people with way too much time on their hands have done exactly that. However, I’m not here to argue. I’m just here to state facts. With that said, there’s only one rivalry that matters: Tortoise vs. Hare.

It’s been thousands of years since the duo first faced off, and their first race was so epic that the tale has been passed down from generation to generation over the past couple of millennia. It’s an underdog story for the ages— Appalachian State doesn’t have shit on the tortoise.

When you consider the hype surrounding the first race, it’s amazing there was never a rematch. Sure, it’s hard to believe the tortoise would come away with the victory if the hare had time to examine the mistakes he made, but it wouldn’t shock me to see him follow in the footsteps of Conor McGregor and agree to a lopsided matchup if the price was right.

Luckily for all of us, it appears someone came up with the cash.

The legendary rivals recently faced off against each other in a race in Thailand, and to call it “electric” would be the ultimate understatement:

I obviously don’t want to take anything away from the tortoise here, but it’s obvious his opponent has a major case of the yips. At this point, I think it’s safe to say the hare is the Nick Folk of animal racing. I’d personally love to see these two go at it again for a third time, but he’s so inside his own head I don’t know if he’ll ever get out.