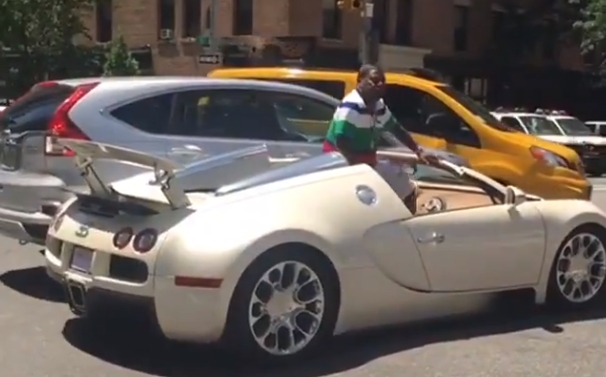 Tracy Morgan is no stranger to car accidents, but his latest driving incident thankfully didn’t hurt his body, but it did damage the body of his brand new supercar. The comedian was involved in a minor car accident in New York City. Morgan purchased a $2 million Bugatti and was hit by a Honda CR-V right after leaving a car dealership in Manhattan.

On Tuesday, Tracy Morgan was ecstatic as he drove his brand new Bugatti Veyron 16.4 Grand Sport Vitesse. Only minutes after leaving the dealership, the 30 Rock star’s new vehicle was slightly side-swiped by a Honda CR-V near the Lincoln Tunnel.

Video from the scene of the accident, which was less than a mile away from the dealership, has emerged that shows that Morgan had a bit of road rage immediately following the collision. The accident reportedly happened near 10th Avenue and 42nd street in Manhattan.

Tracy was not able to get out of his car on the driver’s side so he stood up and slammed on the car windows of the woman’s CR-V as he screamed, “B*tch, get out the car!” Let’s see how well you handle having your $2 million Bugatti getting side-swiped by Karen trying to get to her Bikram yoga class as she’s not paying attention to the road because she’s looking to see how many Likes her Instagram photo of her bone broth received. Then Morgan used the passenger door to exit his vehicle.

Right here is exactly why you don’t drive your supercar with a top speed of 255 mph in New York City, which is basically a bumper cars for adults. Get a crappy

The 61-year-old woman told Page Six, “He was yelling at me, I got scared.” The woman alleges that it was Morgan who caused the accident. “He was the one who hit me!” she said.

According to TMZ, the woman driving the Honda had no idea who Tracy Moragan was. “The people were taking pictures of him and the car. I asked the traffic officer, why people taking pictures and he said, ‘You don’t watch TV? That’s a famous guy,’” the driver said.

The former SNL star assured his fans that he was not injured in the car accident on Twitter. “Thanks for any concern but I am totally fine. My NEW CAR? We shall see. Love you all,” he tweeted.

Thanks for any concern but I am totally fine. My NEW CAR? We shall see. Love you all.

There were no reported injuries at the time of the accident and no arrests according to the police.

This of course is not the first time Morgan was involved in a car accident. Around 1 AM on June 7, 2014, the comedic actor’s limo-bus was hit by a tractor trailer operated by Walmart in New Jersey. The six-vehicle accident on the New Jersey Turnpike caused the death of Morgan’s friend, 62-year-old comedian James McNair.

Morgan suffered multiple serious injuries and was airlifted by a helicopter to Robert Wood Johnson University Hospital, where he stayed for nearly two weeks. Morgan says he doesn’t remember the accident and still has lingering ailments from the car crash such as recurring headaches.