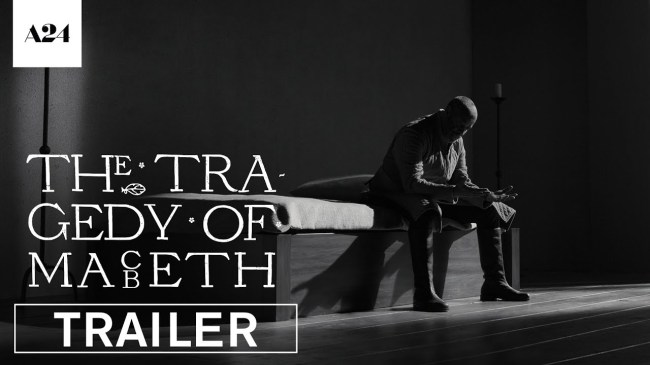 Denzel Washington is playing Lord Macbeth and Frances McDormand is playing Lady Macbeth. They have five Academy Awards for acting between them. Oscar-winner Joel Coen is directing the feature (without the help of his brother Ethan for the first time ever, though) for A24, one of the best movie studios in the game today. And that, really, should be the end of the article. What more could you possibly need? If you’re even remotely a fan of storytelling — forget narrowing it down to “movies”, just storytelling in general — then you should be absolutely gassed up for The Tragedy of Macbeth.

The Tragedy of Macbeth will hopefully mark a return to Oscar-winning form for Washington, as the 66-year-old acting titan last competed for the prize back in 2018, having been nominated for Roman J. Israel, Esq. (Washington was also nominated for his work in Fences the year prior). Washington’s last Oscar win, however, came back in 2001 thanks to his titanic work in Training Day.

McDormand, on the other hand, has been on a tear in recent years, taking home two of her three Best Actress Oscars in the last few years alone. Having first won the award back in 1997 for her performance in Fargo (also directed by the Cohen brothers), McDormand won Best Actress in 2018 for her work in Three Billboards Outside Ebbing, Missouri, and again this past year thanks to her lead role in Chloe Zhao’s Nomadland.

In addition to the Oscar-winning duo of Washington and McDormand, The Tragedy of Macbeth stars Corey Hawkins as Macduff, Moses Ingram as Lady Macduff, Brendan Gleeson as King Duncan, Harry Melling as Malcolm, and Ralph Ineson as The Captain. The film will hit theaters on Christmas Day — December 25 — and AppleTV+ on January 14.