Check Out The Trailer For Your Next Netflix True Crime Documentary Obsession: ‘The Innocent Man’ 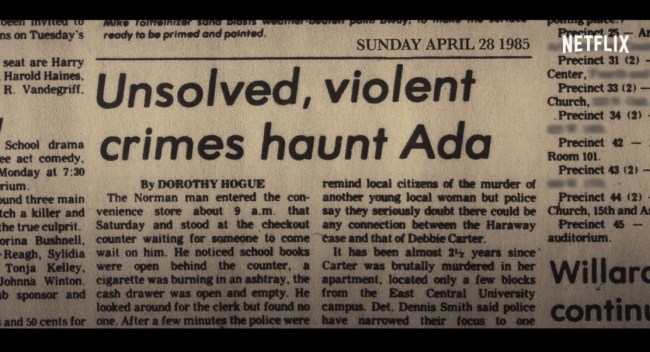 The other day I asked if you guys are fans of Netflix’s many true crime shows? Then I shared 10 more insane stories that Netflix should have made into documentaries.

Turns out there was one more wild true crime story that should have been on the list. The story told in John Grisham’s best-selling true crime book, The Innocent Man: Murder and Injustice in a Small Town.

Thankfully, that story will be told, when Netflix airs what is sure to become a must-binge true crime documentary series called The Innocent Man.

“If I wrote The Innocent Man as a novel, folks probably wouldn’t believe it,” Grisham says in the documentary’s first trailer.

Two murders, four convictions, and a town full of secrets. Based on John Grisham’s only true crime best-seller, The Innocent Man, an old case that shook the small town of Ada, Oklahoma in the 1980s is re-opened with unbelievable evidence that has everyone questioning if the right men were charged, or if the killer is still out there.

The six-part documentary series begins streaming globally on Netflix on December 14th. Check out the trailer below and mark your calendar.

Directed by Clay Tweel (Finders Keepers, Gleason, Out of Omaha), The Innocent Man includes interviews with victims’ friends and families, Ada residents, attorneys, journalists, and others involved in the cases. (Grisham appears, as does attorney Barry Scheck, co-director of the Innocence Project.) Developed as a documentary series by Tweel and Ross Dinerstein, it blends new footage with compelling archival video and photos. The series is produced by Maura Anderson and Shannon Riggs. Executive producers are John Grisham, David Gernert, Tweel and Dinerstein.