Dammit, Travis Barker Is The Latest To Be Seduced By The Lustful Powers Of A Kardashian Sister 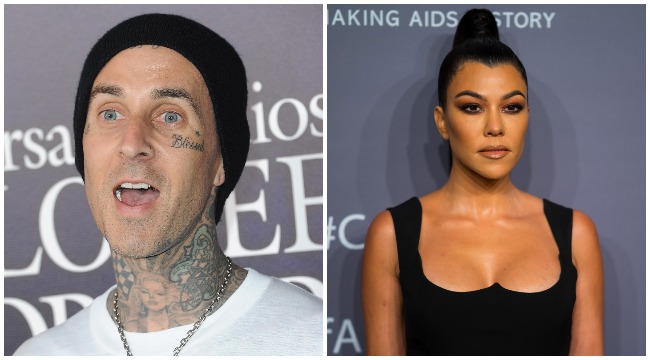 Welp, with Khloe and Kylie grabbing all the headlines with cheating scandals, Kourtney has come in hot with news breaking of her new romance with Blink-182 drummer Travis Barker.

According to Radar, Kardashian, 39, and Barker, 43, have been longtime friends and Calabasas neighbors, but in recent months the platonic friendship has turned physical. The two were spotted attending church services together and meeting up for vegan meals, two things I’d never expect from a rock star. Sources say Kardashian is “really falling for him,” and that “they’ve gotten closer and closer – to the point where he sneakily stays at her place now.”

Mind you, the two will have to jump the hurdle of Barker’s previous obsession with Kourtney’s older sister. Back when Barker was dating Paris Hilton and Kim was nothing more than her assistant, Barker claimed he was, in the words of Lloyd Christmas, “laser beamed, sucked right in.”

“How could you not stare at Kim? Mind you, I enjoyed hanging out with Paris, but I love curvy girl. Kim was eye candy. I was no way disrespectful to Paris, but I couldn’t keep my eyes off Kim!”

Travis Barker survived a plane crash, which some would argue pales in comparison to a Kardashian relationship. Many men have been ruined by a Kardashian sinking their fangs into them, but let’s hope Barker makes it out on the other side. He’s got the much anticipated Warped Tour’s 25th Anniversary shows in June.

With that said, fist bump, bro.

Fist bump. Another one.