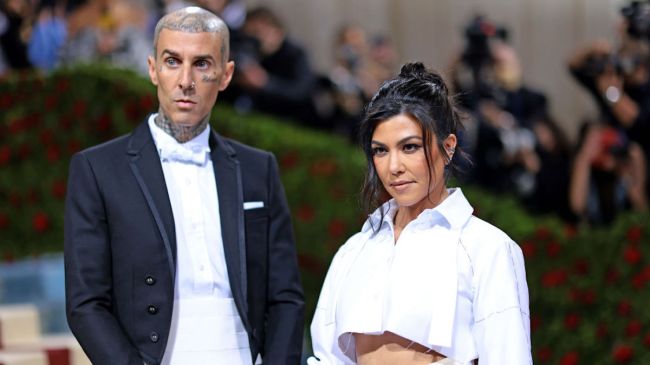 Being born in 1993 and therefore being a primetime Millenial, blink-182 — and therefore Travis Barker — has been a part of my life for over 20 years now.

And given that fact, it remains undeniably strange that Barker is now found himself in one of the world’s most famous families as a result of his marriage to Kourtney Kardashian. And that isn’t me being a jerk, either, as Barker himself also can’t really believe it — in fact, GQ just published an entire profile through that lens.

In that said profile, Barker details how Kris Jenner — ye ole “the devil works hard but Kris Jenner works harder” — asked him to film his proposal for their Hulu reality series The Kardashians.

The proposal itself was filmed for the Kardashians’ new Hulu show, at what Barker says was Kris Jenner’s request. Barker says he agreed on one condition: “I can’t see one camera, and Kourtney cannot see one camera.” ” (Barker popped the question on a beach in Santa Barbara, in a heart-shaped rose garden that had been placed there for the occasion; the footage that aired on the show was captured via GoPros hidden in the foliage.) [via GQ]

Despite the fact that I read the entire GQ profile on Barker, all I could really think about is the potential of his two blink-182 bandmates, Tom DeLonge and Mark Hoppus, eventually appearing in an episode of The Kardashians when the trio goes on tour next year.