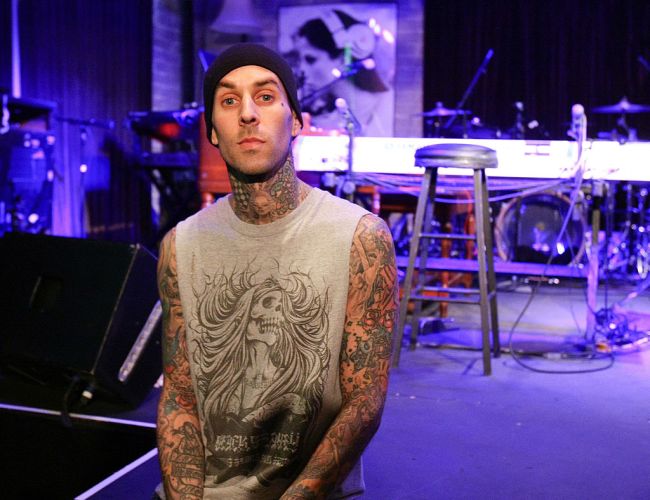 The last time Travis Barker flew on an airborne object, No Country For Old Men won Best Picture, Flo Rida’s “Low” was the first number one song of the year, and Bill Cosby was giving commencement speeches.

Since 2008, the rock star has been traveling by car and bus and has taken the Queen Mary 2 to Europe almost a dozen times, according to a May profile by Men’s Health, after surviving a plane crash that killed four people and left him with third-degree burns on 65 percent of his body, requiring 26 surgeries during a three-month hospital stay.

That changed this past weekend after Barker and girlfriend Kourtney Kardashian boarded Kylie Jenner’s private jet in Los Angeles en route to Cabo, making good on this tweet from June.

The flight distance from Los Angeles to Cabo San Lucas, Mexico is 922 miles, amounting to a flight time of 2 hours and 25 minutes.

Kylie purchased the Global Express jet two years back for a reasonable $72.8 million and it features an entertainment room, master suite, and massive closet.

The 45-year-old seeking comfort for his first flight in 13 years is well-earned.

He was one of just two people to survive a September 2008 plane crash following playing a South Carolina show. During takeoff, the tires blew out, and the plane hit an embankment beyond the runway before bursting into flames. The two pilots, along with two of Barker’s close friends, were killed. Barker and collaborator Adam “DJ AM” Goldstein escaped through an emergency exit, and Goldstein put out the flames that engulfed Barker with the shirt off his own back.

During a 2015 interview with ABC News, Barker revealed that hospital staff had to remove his phone from the room after offering his friends $1 million to take his life.

Barker claimed that cheating death was the impetus for him breaking his addictions to painkiller (which he began taking to deal with the anxiety of flying while touring with Blink-182).

In the hospital, he frequently came to during surgeries because his opioid tolerance was so high. By the time he got out, he’d had enough. He flushed all the medications he’d been sent home with down the toilet—“including stuff that I really needed”—and never looked back.

“People are always like, ‘Did you go to rehab?’ ” Barker says. “And I [say], ‘No, I was in a plane crash.’ That was my rehab. Lose three of your friends and almost die? That was my wake-up call. If I wasn’t in a crash, I would have probably never quit.”

Barker also said back in May that “there are days where I’ll wake up and never think about it,” attributing the reduced trauma to time and taking stock of the good stuff in his life.