Travis Pastrana Jumps Farther Than Evel Knievel Ever Did In Three Epic Events! 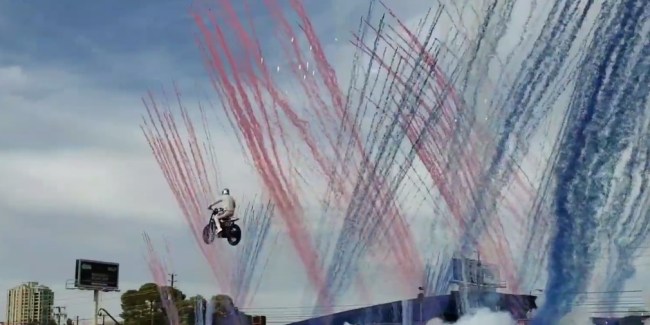 On Sunday night, extreme motorcyclist Travis Pastrana jumped farther than Evel Knievel ever did. The Nitro Circus stuntman nailed three of Evel Knievel’s infamous jumps on live television. Broadcast live on the History Channel tagged as “Evel Live,” the first feat Pastrana tackled was jumping over 52 cars and over 140-feet with his Indian Scout FTR750 and he nailed it. Where Knievel jumped over 50 cars.

He's done it! @TravisPastrana has cleared jump one of three for tonight's #EvelLive How will the next two go? Stay tuned to find out. pic.twitter.com/aFMjHRbMbC

“For me, this is going to be really awesome,” Pastrana said in an interview. “All my family is coming out and so many of my friends are coming out. I literally get to live a day in Evel Knievel’s boots, if you will. I’m pretty nervous. It’s keeping me up a little bit at night.”

Pastrana, the supercross, motocross, and rally racing professional, then vaulted over 16 Greyhound buses (Knievel jumped over 14 buses) with his 350-pound bike.

Our view from our hotel of Travis Pastrana jumping! #EvelLivehttps://t.co/021WfHlP1h pic.twitter.com/GrfjeOA2NP

Finally, the daredevil leaped over the fountains at Caesars Palace, a feat that Knievel never accomplished in full. On November 17, 1967, Knievel attempted to jump the fountains but failed and was hospitalized after crashing his bike. Knievel suffered a crushed pelvis and femur, fractures to his hip, wrist, and both ankles, and a concussion. Knievel later blamed a speed error of approximately 5 mph for the failed attempt. Over 50 years later, the X Games alum achieved the unbelievable. With only 200-feet as a run-up, Pastrana used a burnout start and utilized 10,000 RPMs, Pastrana accomplished the incredible jump.

“The only reason we’re adding more is in the spirit of Evel Knievel,” Pastrana said. “He never wanted to do the same thing twice. He always wanted to push the boundaries. In one day and only a few short hours, Pastrana paid tribute to Knievel’s legacy by surpassing the great stuntman’s achievements.