Now’s Your Chance To Buy One Of The Two Most Complete T. Rex Skeletons Ever Found 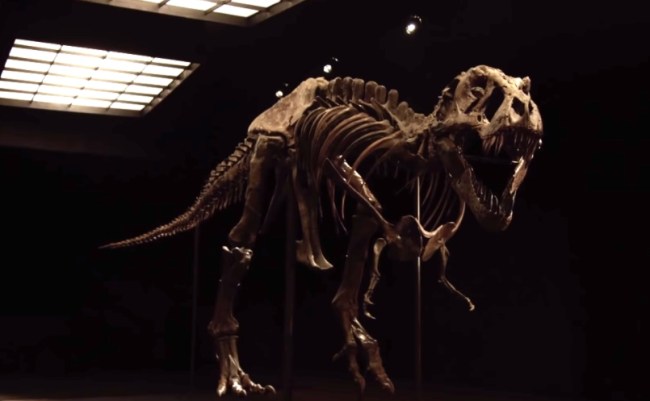 How do you make your domicile stand out and really impress your friends and family? Do you get a kegerator? Add an addition to your backyard like an alpaca farm? Get an autographed and framed El Chapo shirt? You need something bold and unique to grab the attention of people these days. You absolutely need a dinosaur skeleton. And, luckily enough for you, there’s a dinosaur skeleton on the market right now. Not just any dinosaur skeleton, one of the most complete T. rex skeletons ever discovered.

World-renowned auction house Christie’s is giving one lucky son of a gun the opportunity to own one of the rarest things on the entire planet – a Tyrannosaurus rex skeleton.

The 67-million-year-old dinosaur skeleton stands at a towering 13 feet high, nearly 40 feet long, and weighed in at around eight tons, twice as heavy as the average modern African elephant. Now that’s an attention-getter. The dinosaur also has 11-inch-long teeth.

The battle-tested T. rex has puncture wounds on the back of its skull and his rib that were caused by another prehistoric predator, likely by a fellow T. rex.

“Stan’s skull preserves a number of pathologies, or healed injuries,” according to Paleontology World. “The cheeks (jugals) and lower jaws reveal the presence of irregular openings that are not duplicated on the opposite side. One possible explanation for these holes is that they were puncture wounds received in battles with another T. rex. Smoothed edges around the holes indicate that the wounds healed in time. Perhaps the most interesting pathology is found at the back of the skull on the bones that make up part of the braincase. A portion of the top of the crest, where the powerful neck muscles once attached is missing. Below this we find a round hole that is a perfect match for a tooth from the lower jaw of another T.rex. Despite very serious injuries, Stan healed and lived to fight another day.”

The T. rex is named “STAN,” named after Stan Sacrison, the amateur paleontologist who discovered it in 1987 while digging through South Dakota’s Hell Creek Formation. Sacrison reportedly found STAN in the Badlands when he spotted the prehistoric creature’s pelvis poking out of a cliff that stood 100 feet above a prairie. The excavation of the dinosaur skeleton happened in 1992, and it took more than 30,000 hours of labor to unearth STAN.

“We are honored to be bringing STAN to auction and to have been entrusted with the stewardship of such an iconic and important T. rex,” said James Hyslop, head of scientific instruments, globes and natural history at Christie’s. “This is one of the best specimens discovered. There simply aren’t [any other] T. rexes like this coming to market.”

Getting an eigh-ton Tyrannosaurus rex into your foyer will not be easy or cheap. Christie’s estimates that STAN will have an auction price between $6 million and $8 million. That doesn’t include shipping and handling. At $8 million, you might want to keep your golden retriever named Max, who loves to bury bones in the backyard, away from STAN. You also might also want to not let your two 6-year-old nephews from playing tag around your multi-million home decoration.

Beginning on October 6, private bidders will have a shot at purchasing the incredible dinosaur skeleton. Before the Christie’s auction, STAN will be on display for the public to see at the galleries at the Rockefeller Center.

When you go to purchase your dinosaur skeleton, please don’t make the same mistake that Nick Cage made. The Hollywood actor outbid Leonardo DiCaprio, by spending $276,000 on a 7-million-year-old dinosaur skull. However, the dino cranium turned out to be stolen from the Mongolian government, and he had to return it.